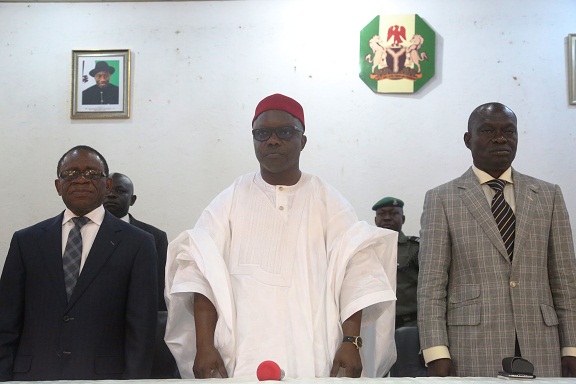 Share
Facebook Twitter LinkedIn Pinterest Email
The Delta State Governor, Dr. Emmanuel Uduaghan, has said peaceful elections in Nigeria cannot be compromised as the nation cannot afford to fail because of its implications for the unity of the country.
Speaking on Monday in Asaba at a Voters Education meeting

with traditional rulers, Governor Uduaghan stated that all hands must be on deck to ensure that the nation got it right as the consequences of failure would be too disastrous.
He said the government, the Independent National Electoral Commission, security agencies and stakeholders were working together to ensure that the forthcoming elections would be free and fair as well as devoid of any form of violence.
He said: “As much as possible, we want to totally remove violence during elections and one way of achieving this is through proper voter education.
“You know ignorance can lead to violence and there are so many people out there that are not well informed about issues surrounding the temporary voter cards, permanent voter cards, the voting process, etc.”
The governor said everything would be done to ensure that there was no violence during and after the elections, stressing: “We are determined to have peaceful elections in Nigeria and Delta State in particular.
“It is important and very critical that we have peaceful elections.”
Uduaghan disclosed that there were still about 600,000 PVCs that are yet to be collected in the state and urged traditional rulers to inform their subjects to endeavour to collect their voters’ cards before the deadline.
Uduaghan observed that Delta State has recorded peaceful campaigns and informed the traditional rulers that President Goodluck Jonathan would lead the campaign train of the Peoples Democratic Party to Asaba on Wednesday for a campaign rally and urged all Deltans to remain peaceful throughout the period.
He said: “We are expecting the visit of the Mr. President to be very peaceful even as the All Progressives Congress presidential candidate, Muhammadu Buhari, had a peaceful campaign in the state.”
He disclosed that security agencies were collaborating to ensure a hitch-free visit by the President and his team.
He also observed that Delta State has recorded a peaceful electioneering period, adding: “The beauty of our primaries was that they were all peaceful, candidates emerged, nothing unusual happened as it concerns security issues.
“We thank God for that because we had some other states in the country where there was violence after their primaries.”
Uduaghan enjoined security agencies to be more vigilant after the presidential elections, noting that the state elections are more competitive in Delta State.
The Resident Electoral Commissioner in Delta State, Elder Aniedi Ikoiwak, said INEC was prepared for peaceful, free, fair and credible elections.
Ikoiwak disclosed that logistics have been put in place for accreditation of voters to commence at exactly 8am on the day of elections.
He emphasized that voting can only be done with the PVCs and by the owners of such cards as electronic card readers have been procured to ensure that voting cannot be done by proxy.
Traditional rulers who spoke at the occasion promised to enlighten their subjects on the need to collect their PVCs, while heads of security agencies assured Deltans that no stone would be left unturned to ensure peaceful and successful elections.
They warned trouble makers to desist from entering the election venues as they were prepared to prosecute anybody caught engaging in actions that are detrimental to the electioneering process.
2015 election Governor Emmanuel Uduaghan
Share. Facebook Twitter Pinterest LinkedIn Tumblr Email