Nigeria, Brazil, Russia slug it out In Dubai 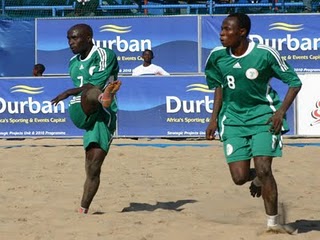 The Nigeria Football Federation has announced that the Beach Soccer National Team, otherwise known as the Supersand Eagles, will take part in the Eight-Nation Samsung Beach Soccer Intercontinental Cup competition in Dubai, United Arab Emirates between October 30 and November 3, 2012.
The tournament will feature four-time world champions Brazil; reigning world champions, Russia; host, United Arab Emirates; next year’s FIFA Beach Soccer World Cup host, Tahiti; United States of America; Japan and Switzerland.
Already, the participating teams have been drawn into two groups of four teams each, with UAE, Russia, Tahiti and USA in Group A and Nigeria, Brazil, Japan and Switzerland in Group B.
Participating teams are expected to arrive in Dubai on October 28.
Only three of the invited 18 players are yet to report to the Supersand
Eagles training camp in Badagry, Lagos State, with Abdul Haruna having only recently lost his father in-law; Bartholomew Ibenegbu down with typhoid fever and Ogbonnaya Okemiri excused to attend a screening exercise with Akwa United FC.
The team, under the watchful eyes of Coach Adamu Audu Ejo, now trains twice a day after maintaining once-a-day training for the past few days.
Nigeria’s Supersand Eagles reached the quarter finals in last year’s FIFA Beach Soccer World Cup in Ravenna, Italy and won the Four-Nation Invitational Tournament held in Lagos, styled COPA Lagos, in December 2011, mauling four-time world champions, Brazil, England and South Africa on their way to glory.
The tournament in Dubai is expected to put the Nigerian team in great shape for the defence of their title at this year’s COPA Lagos, set for December 14 to 16, 2012.