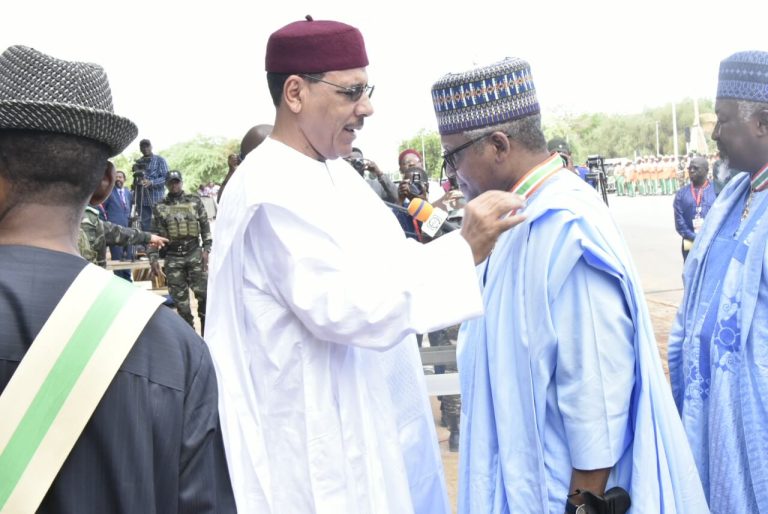 The President/Chief Executive of Dangote Industries Limited, Aliko Dangote, has been conferred with the Commander of the Order of Merit of Niger award by the President of the Republic of Niger, Mohamed Bazoum, in Niamey.

According to the certificate of conferment presented to Dangote in Niamey, the nation’s capital, the award was in appreciation for his services rendered to the Republic of Niger and as well as a tribute to his business acumen and philanthropy.

It should be recalled that his Foundation, Aliko Dangote Foundation, intervened in various ways to improve healthcare and routine immunisation in Niger Republic and her neighbouring countries namely Nigeria and Chad.

In a related development, Aliko Dangote Foundation alongside the Bill & Melinda Gates Foundation and GAVI the Vaccine Alliance have signed a Memorandum of Understanding with the government of the Republic of Niger on a collaboration for improving the Expanded Programme on Immunisation in Diffa, Maradi and Zinder regions, which are along the country’s southern border with Nigeria.

The Nigerien national award by the president is in recognition of the various health-related interventions by the Aliko Dangote Foundation, including financial support to the tune of $500,000 to fight a previous Meningitis outbreak and another cholera outbreak; N250 million for the provision of food for refugees and displaced persons; and $1 million support for enhanced routine immunisation in the three identified regions of Diffa, Maradi and Zinder.

Aliko Dangote Foundation and BMGF had played key roles in a historic certification by the World Health Organisation of a polio-free Nigeria and Africa in August 2020.

The same successful template, which was applied to ensure eradication of polio in northern Nigeria in partnership with six states, namely: Bauchi, Borno, Kaduna, Kano, Sokoto and Yobe, is also being applied by ADF to enhance routine immunisation and adequate vaccination around Nigeria’s borders with the Republics of Niger and Chad.

The three regions of Diffa, Maradi and Zinder share a common border with Northern Nigeria and together make up almost 28 per cent of Niger’s land area and about 40 per cent of the country’s population.

Speaking on the MoU partnership, which was signed in May 2022, the Managing Director of Aliko Dangote Foundation, stated: “ADF is committing $1 million over three years, BMGF are providing $2 million, while GAVI is bringing in $10 million worth of vaccines under this MoU. ADF and BMGF are bringing in the money required to stimulate demand for the vaccines that GAVI is bringing in to ensure maximum uptake and coverage.”

The MoU was signed between the Government of the Republic of Niger, represented by the Ministry of Public Health, Population and Social Affairs, Ministry of Interior and Decentralisation and the Ministry of Finance on the one hand, and Incorporated Trustees of Aliko Dangote Foundation and Bill & Melinda Gates Foundation, two independent endowed charities and GAVI, Vaccine Alliance, a Global Public-Private Partnership on the other hand.

The Foundations are committed to providing technical and financial support to the Government of Niger to strengthen its vaccine programmes gradually and sustainably improve its coverage in the Diffa, Maradi and Zinder regions in order to prevent vaccine-preventable diseases.

Gavi, according to the MoU, will continue its support for immunisation in the selected priority districts in the three regions, in accordance with the agreement already signed with the Government of Niger, strategic objectives of the Health System Strengthening Project grant and the approved financing.

In order to protect the target populations against poliomyelitis and other vaccine-preventable diseases, the government of Niger is committed to strengthening the routine vaccine programme and to reduce morbidity and mortality in the regions of Diffa, Maradi and Zinder.

The objective of the MoU is to collaborate on strengthening vaccination in Niger to improve the delivery of routine vaccine services in the three regions in order to achieve full vaccination coverage of 90 per cent of the target population by December 2024; to ensure that at least 90 per cent of districts achieve 90 per cent Penta 3 vaccination coverage; to vaccinate 90 per cent of the zero doses identified; to stop poliovirus transmission and maintain polio-free status; and to ensure consistent national funding and procurement of vaccines in order to secure a sustained and steady supply of all routine vaccines throughout the country.

In August 2020, President Muhammadu Buhari praised Bill and Melinda Gates, Aliko Dangote and Emeka Offor at the formal certification of the Wild Polio Virus eradication in the African region during the virtual session of the 70th World Health Organisation regional committee for Africa in the State House, Abuja.

His commendation came as Aliko Dangote emphasised the need for governments across Africa, particularly the federal and state governments in Nigeria, to increase their budgetary allocations to the health sector to improve basic healthcare for the people.

Dangote, in his remarks at the event, expressed deep satisfaction at the final eradication of wild polio in Nigeria, and by extension Africa after years of hard work and collaboration among stakeholders.

The renowned humanitarian, who was commended alongside the Co-Chair of Bill & Melinda Gates Foundation, Bill Gates, pledged to devote more of his wealth to support the provision of adequate quality healthcare to curb maternal and child mortality.

Dangote commended the efforts of top officials of the Foundation, including the CEO, Zouera Youssoufou, and Community Engagement Lead Ahmed Iya for their untiring efforts in ensuring the end of polio in Nigeria, as well as the various state and federal government agencies and development partners who collaborated to make the certification possible.