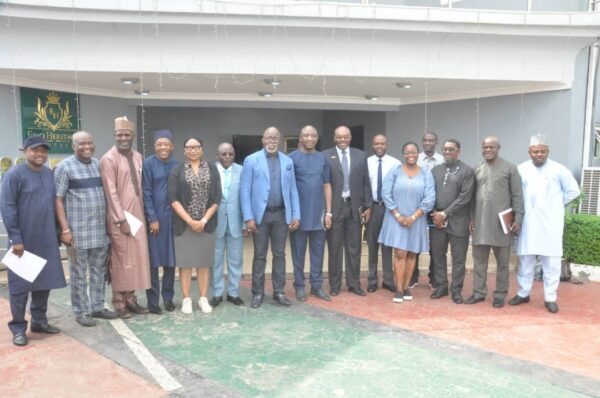 The President of the Nigeria Football Federation, Amaju Melvin Pinnick, on Tuesday inaugurated the ad-hoc committee set up by the football-governing body to investigate the death of Nasarawa United player, Chineme Martins, charging the panel to come up with robust and sincere recommendations that will constitute the standard protocols for football organization in the country going forward.
Pinnick said: “I am happy at the calibre of the people who make up the membership of this committee and I have no doubt you will come up with the right protocols that must be adhered to before any football match takes place anywhere in Nigeria.
“This is the time to make difficult decisions and I trust you to make them for us.
“Your job is a very serious one.
“You are free to tinker with the terms of reference and avail us the steps that will safeguard the future of our players in the areas of medical, safety and security.
“We pray that the soul of Chineme Martins rest in peace but we are pained by his death and we must use it as a wake-up call to enforce compliance with the provisions of Club Licensing as well as the fresh medical and security protocols that this committee will draw up.”
Pinnick and members of the committee as well as NFF Executive Committee member Aisha Falode, who was present at the inauguration, observed a one-minute silence in honour of Martins, who slumped and died during a Nigeria Professional Football League match between his club and Katsina United at the Lafia City Stadium on March 8, 2020.
The Chairman of the committee, Dr. Peter Singabele, who is a member of the CAF Committee on Sports Medicine, thanked the NFF President for the opportunity given them to take a very critical look at organization of football matches in Nigeria, pledging that with the experience, energy, assiduity and sincerity of members, the committee will draw up recommendations that will ensure that such lapses as led to the unfortunate death of Martins never recurs in the country’s football.
After the inauguration, committee members paid a visit to the Samuel Ogbemudia Stadium, venue of this year’s National Sports Festival (postponed on Tuesday), to conduct checks on safety, security and medical facilities and equipment, and provided advice on areas in need of uplift and upgrade.
Specifically, it advised that three more exit gates being constructed at the arena be finished quickly, ambulance’s cylinder must always be filled with oxygen, the clinic should have a steriliser and that examination tables and showers are non-negotiable in the doping control room.
The committee will also visit Lafia City Stadium for similar checks, before concluding its work and submitting its report to the NFF President.
Other members are Mazi Amanze Uchegbulam (Chairman of the Imo State Football Association, former 1st Vice President of the NFF and former Vice President of the CAF Appeal Board); respected technocrat and retired senior civil servant, Alhaji Abba Abdullahi Yola; Dr. Paul Onyeudo, Head of Sports Medicine of the Federal Ministry of Youth and Sports; Otunba Tade Azeez, President of the Nigeria Referees Association; Tijani Babangida, President of the National Association of Nigeria Professional Footballers; and Alhaji Salihu Abubakar, Chief Operating Officer of the League Management Company.
Commissioner of Police Umar Baba, Oladunni Oyekale, Francis Adejoh, Dr. Ibrahim Gyaran and Kisu Remi Sulola are the other members, with China Acheru as secretary. Member of the NFF Executive Committee, Alhaji Ibrahim Musa Gusau, NFF’s Director of Communications Ademola Olajire and NFF’s Head of Legal/CAF Safety and Security Officer Okey Obi are co-opted members.