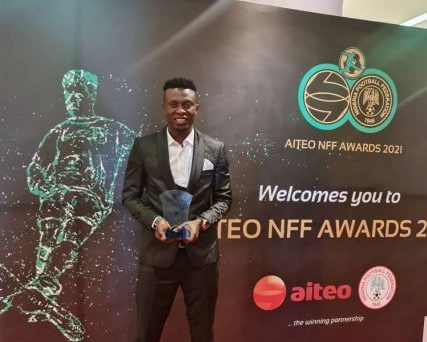 The award was presented by the Nigeria Football Federation in collaboration with Aiteo to the player on Monday.

Aiteo is the official sponsor of the Federation Cup, formerly known as FA Cup.

The presentation of the award to Nwankwo was done during the NFF Award night held in Lagos.

Shortly after being presented with the award, the energetic attacker, accompanied by the Club’s Chairman, Isaac Danladi, stated: “It feels great, actually, to be called upon.

“It gives me the notification that I am being watched as well as the Nigerian players, and Aiteo really made this happen.

“I am enjoying myself right now.

“The award is great and sends a lot of signals to the world, especially we the players in the local league, so that we can do our best to get this kind of recognition.

“Nasarawa United is one of the best teams in Nigeria (I must be honest to you); No pressure, plenty of love and all that, and that made me exhibit it on the pitch of play as my reward for their kindness.

“I dedicate this award to God Almighty, my Football Academy, and then to everyone at Nasarawa United FC and entire Nasarawa State, beginning from the Executive Governor, His Excellency, Engr. Abdullahi Sule, and everyone that was there for me that I can’t mention all now.”

The Nasarawa United’s player was a sensation during the recently concluded 2020/21 Nigeria Professional Football League Season, netting a total of 19 goals for the Solid Miners, thus emerging as the highest goalscorer, a feat he shares with Akwa United’s Charles Atshimene.

Nwankwo, a former player of Sunshine Stars FC of Akure, Ondo State, joined United at the beginning of last season and didn’t delay before inking his name in the history books of the Lafia-based side with those glorious goals, with no special effects or camera tricks.

He was remarkable on the ball with unexplainable energy, and his swivel and finishing were out of this world!