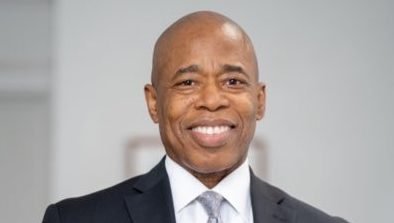 Eric Adams, the Democratic nominee for the Mayor of New York City, has pledged to establish sister city agreement between New York and Lagos to boost economic development, if elected mayor in the November election.

Adams disclosed this at the Meet and Greet Fundraiser for the 2021 New York City Mayoral Election organised by the Nigerian-American Community in New York.

Adams, who is Brooklyn Borough President, said he went to Goree Island, Senegal and established a sister city agreement between the Island and Brooklyn three years ago.

“We are going to do something specifically for the African continent. We are going to renew our relationship. We are now going to start sister city agreement with all the major cities on the continent of Africa.

“We are going to acknowledge the presence of Africa and make sure we treat it with respect that it deserves.’’

According to him, sister city agreement signifies a long-term partnership between two communities in two countries that touches on cultural exchange, economic development, and other important areas.

The nominee lauded the Nigerian-American community for the dedication and handwork, saying, you came here as professionals, as business owners, as medical professionals and teachers.

“You have carried your role in such a dignified manner but you took part in a decision that is crucial to your community, that starts January 1st, when I will become the Major of New York.

“A relationship of how to use the role as a Major to assist you, empower you in your community,” he said.

Adams also pledged to support African leaders by hosting them during the annual UN General Assembly at the UN headquarters in New York.

“When we will have the UN General Assembly, we are going to host all the African leaders that are coming into America.

“They are going to be part of delegation and ceremony of how we reunite the African spirit here in New York and all on the continent of Africa.

“This is a very important moment for us, not only for New York City but when we get it right and we are going to make sure that never again will we allow anyone to divide us.

“I need you to finish this job,” he said.

The Nigerian-American community had on June 5 endorsed Adams as the New York City Mayoral candidate for the general election after series of debates with the candidates and consultations among Nigerians.

Adams, therefore, thanked the community for their assistance so far and further solicited their support in winning the general election.

“You said on the eve of the primary, you told me, I’m going to be the next Mayor of the city of New York. I thank you. Let us make this happen again,” he said.

Responding on behalf of the Nigerian-American community, Mr Gbenga Omotayo said Adams’ antecedent and his love for Africans made the community supported his mayoral candidacy.

“We banked all our hope in you because we know, you genuinely love the African people and for that, we celebrate you.

“I will like everybody to know that the journey that you see today didn’t start now, we have been through many odds.

“They say Nigerians cannot work together but here we are, working together. So, I want to celebrate everyone here,” he said.

According to him, Nigerians are known to be the most educated in the U. S. and looking at per capital income of the people; they are most success, resilient, hardworking and intelligent.

Omotayo, who is Chairman NAPAC New York, reassured Adams of the community’s support to win the mayoral election.

“We will go beyond Nigerian community to a larger Africa community to mobilise ourselves to ensure that your nomination translate into a landslide victory in November 2 by the grace of God,” he said.

The event was coordinated by the Organisation for the Advancement of Nigerians (OAN) and NAPAC.