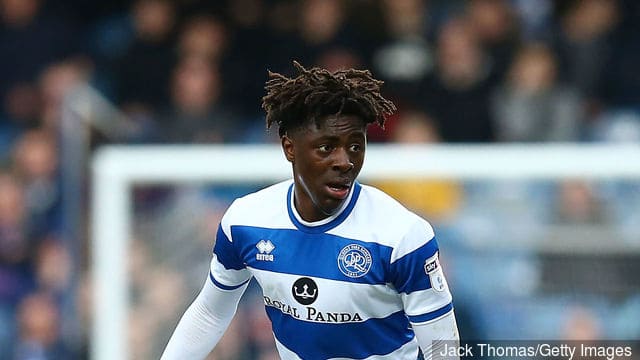 QPR midfielder Eberechi Eze will strengthen his bid for an England call-up if he continues his fine form at club level, according to Les Ferdinand.
With the European Championship postponed until 2021 amid the coronavirus pandemic, the club’s director of football believes the England U20 international has the talent to challenge for a place in Gareth Southgate’s squad.
Ferdinand concedes Eze may need to be playing in the Premier League to be considered for a senior call-up and, with an impressive return of 12 goals and eight assists in the Championship this season, he is reportedly attracting interest from Tottenham.
“A lot of the time you need to be in the Premier League to be recognised but he has shown the kind of form and, if he continues to develop in the way he is developing and keeps showing the type of football he has been playing, he is certainly going to put himself in the frame,” the former QPR and Tottenham striker told Sky Sports News.
“People are going to start talking about him playing for England.
“He came through and we have got a few others at the club too. Bright Osayi-Samuel is doing extremely well, as is Ryan Manning at left-back. He is not English but he is in the Ireland set-up.
“We have got a few young players coming through the system now who we are really excited about.
“They are helping us in our campaign this season to finish as high up the league as we possibly can.”
After English football was put on hold until at least the end of April as a result of the outbreak, Ferdinand is urging people to follow government guidance on social distancing to help limit the spread of the disease.
“We are all up in limbo at the moment in terms of when the season will start again,” he said.
“There is lots of talk about when we are going to resume training, but that is all up in the air because the more we don’t isolate, the more this disease will continue to spread and the longer things will take to get back to normal.
“It is imperative that people do stay at home, listen to the government advice and the sooner we all adhere to that, the sooner we can get back to some sort of normality.”