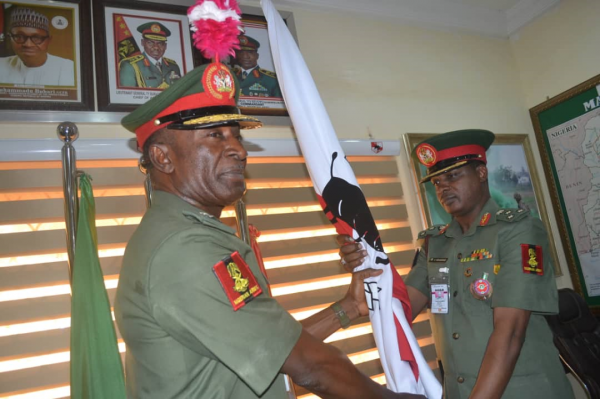 The newly-appointed Commandant, Nigerian Army Depot, Kaduna, Brig.-Gen. Sani Mohammed, on Wednesday assumed duty.
The News Agency of Nigeria reports that Mohammed took over from Maj.-Gen. Victor Okwudili-Ezugwu, who was redeployed to the Vehicle Manufacturing Unit, Kaduna, as the Chief Executive Officer.
Before his current appointment, Mohammed was the Acting Director of Manpower Planning (Army).
At the handover ceremony in Zaria, the outgoing commandant thanked God and army officers and men in the depot for support.
Okwudili-Ezugwu urged the personnel to also support the new commandant to enable him to take the depot to greater heights for the good of the Nigerian Army and the nation at large.
He said that new training methods were recently introduced in the depot in line with the directive of the chief of army staff toward enhancing standards.
He said: “I want to state that, during my stay here as the commandant, we introduced new training techniques as directed by the chief of army staff; we have been able to follow this directive to the latter; nothing was left out.
“We have been able to achieve this with support and cooperation from all of you. I want you to extend the gesture to the new commandant.’’
Responding, Muhammed thanked God for sparing his life to get to the current status.
He praised the outgoing commandant for the legacies he left behind in the depot.
He promised to sustain established standards and build on what had been achieved, to take the institution to the next level.
He said: “With all sense of humility, Maj-Gen. Okwudili-Ezugwu is my mentor; I will do my best to sustain the standards he established.
“This will not be possible without your support and cooperation.
“I want to plead with all of you to give me the support and cooperation you gave my mentor, to take the depot to greater heights.”
NAN reports that Mohammed, who hails from Bichi, Kano State, holds a bachelor of science degree in biological sciences and a master’s degree in defence studies.
He served in the then ECOMOG and also in the United Nations.