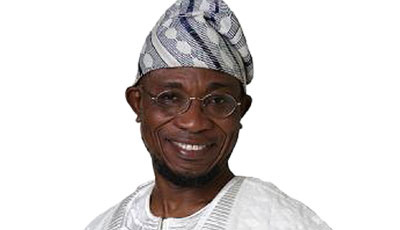 Share
Facebook Twitter LinkedIn Pinterest Email
The National Economic Council rose from its monthly meeting on Thursday approving the sharing of $150 million among the three tiers of government.
The money is part of the $400 million dividends paid by the Nigerian Liquefied Natural Gas.
Vice President Yemi Osinbajo (SAN) chaired the meeting at the State House Council Chambers.
Briefing State House correspondents after the meeting, Governor Rauf Aregbesola of Osun State, flanked by his Enugu State counterpart, Ifeanyi Ugwuanyi, said the Council has also directed that the balance of $250 million from the NNLG dividend be invested in the Nigeria Sovereign Investment Authority.
According to Aregbesola,  the decision to share the $150 million was taken sequel to a status report of the NSIA presented to the Council by the Managing Director of the Sovereign Wealth Fund Authority, Uche Orji.
Aregbesola spoke further: “After due deliberations on the report, the Council agreed that $250 million from the $400 million LNG dividend be invested in the Nigerian Sovereign Investment Authority to increase its capital.”
The Council also directed the Minister of Finance, Kemi Adeosun, to constitute an executive nomination committee and work in consultation with NEC to appoint appropriate persons to take over as board members of the NSIA if the current board is dissolved.
Aregbesola stated the Accountant-General of the Federation reported that the balance of the Excess Crude Account stood at $2.257 billion and that not much change from the last report.
On the report of government agencies generating revenues in foreign currency but remitting naira equivalent into the Federation Account, the Council mandated the Ministry of Finance to investigate and report back.
Aregbesola further said the Central Bank of Nigeria has been mandated to embark on sensitization and public enlightenment on the forex policy and relevant laws and regulations so as to guide traders and some people who encounter challenges regarding the movement of foreign currency across the nation’s borders.
“We understood that some traders particularly in the East encounter challenges at the airports when they intend to go about their businesses,” he said.
In the same vein, the Director General of National Pension Commission, Chinelo Anohu-Amazu, briefed the Council on the contributory pension scheme implementation effort and status of implementation by the states.
The highlight of Anohu-Amazu’s briefing, Aregbesola said, was on the sustainability of the pension arrangement, scorecards of the states in the implementation of the scheme, the challenges being faced by the states, opportunities and also the steps towards full implementation by the states.
He said the briefing also highlighted the need for the states to provide legal frameworks such as enacting state pension laws by those who have not done so, establishment of states pension agencies, consistent remittance of both employees and employers contributions and also full compliance of all provisions of the pension scheme.
The Council meeting also witnessed a workshop on Treasury Single Account for state governors with the International Monetary Fund Senior Resident Representative, presenting a paper on the TSA.
Presentations were made on the listed sub-topics: implementation of TSA in states: lessons and experience; cash management and TSA reform: an overview of international practice; and budgeting reforms.
Another decision taken was the need to reconstitute the members of the governing board of the Niger Delta Power Holding Company, following which Osinbajo called for the nomination of new board members based on the six geopolitical zones.
NEC comprises of the 36 state governors, some key ministers and is chaired statutorily by the Vice President.
NEC Rauf Aregbesola
Share. Facebook Twitter Pinterest LinkedIn Tumblr Email