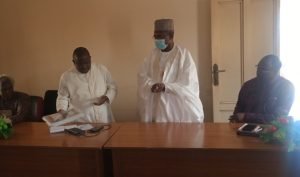 Brig.-Gen. Buba Marwa (retired), the Chairman and Chief Executive of the National Drug Law Enforcement Agency (NDLEA), has met with the Plateau Chapters of the Christian Association of Nigeria (CAN) and the Ja’amatu Nasril Islam (JNI) to collaborate on ways to curb the surge of drug abuse in Nigeria.

Marwa met separately with the leadership of the two religious bodies on Thursday in Jos.

He urged the two groups to ensure drug tests are conducted for intending couples as criteria before marriage.

According to him, the two religious bodies have key roles to play in ending the rising spate of drug peddling and consumption in the country.

He maintained that conducting drug test for intending couples will be a key strategy towards curbing the consumption of illicit substances among young people.

“The rise in drug abuse particularly among young Nigerians is alarming.

“Both Muslims and Christians take illicit substances; there is no religion or community that is exempted.

“But most importantly, we want to appeal that just like HIV, Hepatitis and other tests are compulsory for intending couples, we want you to include drug test as part of conditions before marriage.

“We strongly believe that such move will go a long way to curtail the way young people abuse drugs in the society,” he said.

Marwa further urged the religious leaders to include drug teachings in their sermons, Sunday school manuals and catechism.

He also urged parents to educate their wards on the dangers of drug abuse.

The chairman assured that the agency was doing all within its powers to curb influx of illicit substances into the country.

He vowed that anyone caught with hard drugs, no matter how highly placed, would be made to face the full wrath of the law

“Our target is to make illicit drugs scarce; when it is not available, the consumption will also go down.

“This is why NDLEA is doing all within its powers to seize illicit drugs at all points and we will continue to do so until we chase the monster away from our society,” he said.

In his response, Rev. Fr. Polycarp Lubo, Chairman of CAN in Plateau, thanked Marwa for the visit.

He commended the NDLEA chairman for waging a serious war against drug peddling and consumption in the country, and promised to support him to succeed.

“I am happy with the suggestion for drugs test for intending couples; it is a welcome idea.

“That will reduce the domestics violence that we face in our homes today and as a church, we will look into it with serious urgency

“I want to assure you that Christians in Plateau will support you to succeed.”

Lubo, however, called on the government to address poverty, hunger and unemployment, insisting that such move would naturally reduce drug abuse in the society

Alhaji Auwalu Nura, who spoke on behalf of JNI, also promised to support the NDLEA succeed in its war against drug abuse in the society.

The News Agency of Nigeria reports that the NDLEA boss also met with the leadership of the National Union of Road Transport Workers, Luxurious Bus owners, among other transport unions in the state.