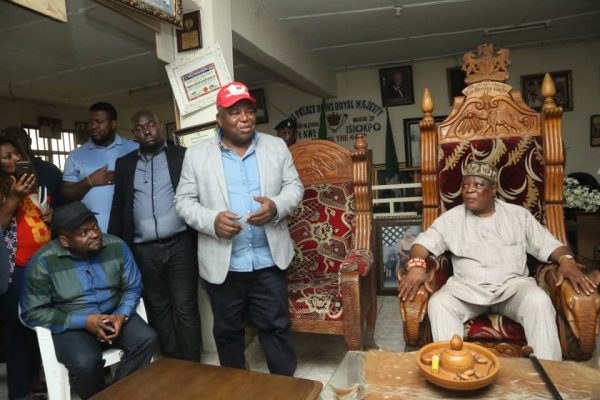 The Acting Managing Director of the Niger Delta Development Commission, Prof. Nelson Brambaifa, has pledged to commission a pilot power project that will restore electricity to Ubima and Isiokpo in Ikwerre Local Government Area of Rivers State before the end of the month.
Brambaifa gave the assurance when he paid a courtesy visit to the Chairman of the Supreme Council of Ikwerre Traditional Rulers, Eze Blessing Wagor, Nye-Nwe Ali Isiokpo, in his palace.
He was accompanied by the NDDC Acting Executive Director, Finance and Administration, Dr. Chris Amadi, and other directors of the Commission, who were on inspection of projects in Ozuoba, Omagwa, Ubima and Isiopko.
Brambaifa said he was shocked to learn that the Ikwere kingdom had been without public power supply for over two years.
He described it as “anomalous and absurd,” stating that the situation needed to be corrected urgently as part of a region wide intervention in communities of the Niger Delta.
The NDDC boss said the Commission was determined to face challenges of development to improve the lives of the people.
He said: “We swung into action immediately to address these challenges, because the people of the Niger Delta region deserve better.”
He promised that “the electricity project, which is almost completed, will be commissioned in the next two weeks.”
Brambaifa said the NDDC was using the restoration project for Ubima and Isiokpo as a pilot scheme that would eventually cover all the other distressed areas in the Niger Delta region.
He appealed to traditional rulers and benefitting communities to ensure that the electricity infrastructure in their areas were protected from vandals and thieves.
In his own remarks, Dr. Amadi stated that the communities alerted the NDDC to the deplorable power situation in the area, adding: “For two and half years, the Ikwerre people lived without electricity.
“I am happy to announce that work has started in earnest in Ubima and Isiokpo.
“In fact, the contractor has assured us that the electrification project will be completed before the end of this month.”
The Traditional Prime Minister of Isiokpo, Chief Wobo Amadi, who spoke on behalf of the Nye-Nwe Ali Isiokpo, said the NDDC had shown that it could be relied upon for development projects.
Amadi said the people were particularly impressed by the prompt action of NDDC, saying to Brambaifa: “You are a man of your words.
“You have done so much in three months and we are confident that you will do more.”
He expressed delight that their agony from many years without electricity would soon be over and pledged that the communities which are benefitting from the NDDC would guard the projects “jealously and protect them from vandalism”.
The Managing Director of Income Electrix Limited, Matthew Edevbie, the contractor handling the project, explained that the entire Ikwerre Local Government Area was going to be served by two sources of power: one from Ahoada and the other from Rumuosi sub-stations.
Edevbie added: “In Ubima, we have installed eight transformers and within the next one week there will be power in the town.
“We are appealing to the communities to safeguard the power infrastructure.
“The youth leader in Ubima has promised us that our equipment and installations will be protected from being stolen or vandalised.”
He charged the people to realise that the power asset was being provided for their own good and should, therefore, be secured.
He urged them to also note that it was important to pay for the power they consume to ensure that the providers were able to sustain the service, adding that electricity supply was like a commodity that should be paid for to guarantee continued service.
He remarked that NDDC had made provision for the supply of some metres to be distributed free to poor consumers in the community.