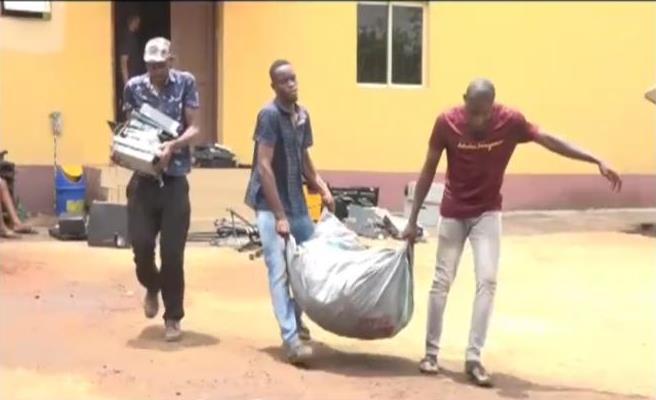 Three broadcasting facilities engaged in pirating the broadcast signals of several right owners: Star Times, Communications Trends Nigeria Limited and MultiChoice Nigeria, have been closed down during joint enforcement operations carried out by operatives of the Nigerian Copyright commission and the Department of State Services in Aba and Umuahia, Abia State.
The illegal broadcasting stations were sealed and broadcast contrivances impounded for being deployed in the illegal distribution of pay TV channels and unauthorised retransmission of other cable TV’s protected contents in violation of the Copyright Act.
Based on intelligence and surveillance reports, the broadcast facilities of Popular Broadcasting Service and Modern Communication Limited, being used for copyright infringement activities, were confiscated on Thursday, while employees engaged in broadcast piracy were arrested during joint enforcement operations by three separate teams of NCC and DSS operatives.
Following months of surveillance and intelligence gathering, the illicit broadcast operations at the three facilities located in Aba and Umuahia in Abia State were interrupted when Copyright Inspectors from NCC and DSS operatives raided the facilities.
Equipment found on the premises of the illegal broadcasters included those for the retransmission of Star Times, Communications Trends Nigeria Limited TV and MultiChoice Nigeria contents.
Also recovered were broadcasting decoders for Ben Sports, Canal Plus and other contrivances used for their illegal activities in violation of the provisions of the Copyright Act.
Speaking on the raid, the Director-General of Nigerian Copyright Commission, John O. Asein, represented by Nkechi Ezinma, State Coordinator of NCC Rivers State Office, reiterated the determination of the Commission to confront copyright piracy in the different industries.
Asein expressed the Commission’s gratitude to the Director-General of the DSS for the operational and logistic support that made the raid and arrests possible.
In his words: “The joint operation is a demonstration of a common objective of relevant agencies to ensure that the laudable economic policies being introduced by Government are not thwarted by the illegal activities of unscrupulous persons.”
According to the Director-General, the ongoing efforts of the Federal Government to reposition the broadcast industry and ensure a safe and investment friendly legal framework call for a more proactive copyright enforcement strategy.
He assured investors in the creative sector, particularly the broadcast industry, that the Commission would continue to ensure that they enjoyed safe corridors to guarantee returns on their investment.
The Director-General said investigation into the activities of the suspects would commence immediately and any copyright infractions would be prosecuted while other criminal activities would be reported to the relevant agencies for further action.
He appealed to the public to desist from patronising copyright pirates and urged them to report suspected copyright violations to the Commission.
One of the arrested operators, who claimed that he once had a broadcast licence from the National Broadcasting Commission, however, confessed that the licence had since lapsed.

Why we are transforming our food systems, by Osinbajo