Ikra Bilbis, Chairman of the Commission’s Board, had called for papers on the amendments to the code over concerns raised by stakeholders.

In a notice issued by Bamidele Aluko, a lawyer, on its behalf, the Board said it held a meeting where it decided a review of the Code was necessary.

The notice said: “The Board of the National Broadcasting Commission sat to review the various positions and resolved that fresh invitations be extended to all stakeholders in the industry especially those with genuine observations aimed at improving the quality of Broadcasting in Nigeria.

“Position papers in respect of the proposal amendments should please be submitted to reach the following e-mail addresses not later than 9th of July, 2020.”

But on Monday, Prof. Armstrong Idachaba, acting Director-General of the commission, said in a public notice that the call by the Board for submission of position papers did not have the endorsement of the commission.

Idachaba said: “The amendment to the 6th Edition of the Code, we must reiterate, is consequent to the presidential approval for the reform of the National Broadcasting Commission.

“The amendments went through the necessary processes culminating in a public presentation to critical stakeholders on the 26th of March, 2020, at L’eola Hotel, Lagos.

“The amendment, as released, is therefore final. Any group wishing to make further inputs will exercise such views at the next Review of the Code.”

NBC sources said Idachaba was forced to sign the public notice as he was unaware it was drawn up until late in the evening on Sunday when it was sent to newspapers for publication.

The code had caused an outcry among stakeholders, with many complaining of the failure of the NBC to make wide industry consultations and that it will do grave harm to the industry.

The NBC, in the new regulation, states that every broadcaster must license its broadcast and/or signal rights in any genre of programming to another broadcaster in Nigeria if “the genre of programme(s) enjoy(s) compelling viewership by Nigerians; it relates to a product or service that is objectively necessary to be able to compete effectively on a downstream market; or if it is likely to lead to the elimination of effective competition on the downstream markets”.

The new subsidiary legislation adds that refusal to comply will lead to consumer deprivation and stipulates the imposition of a N10 million fine for operators who fail to comply. 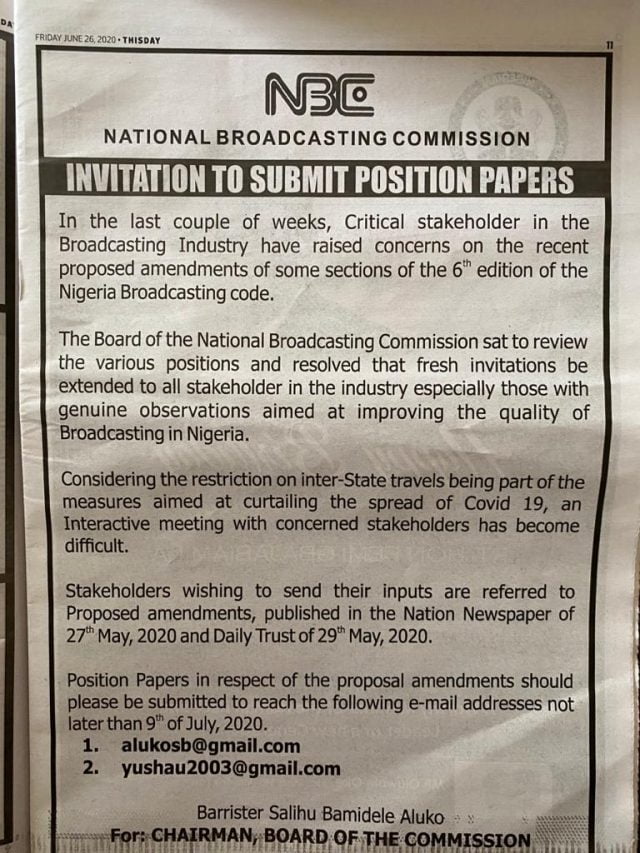 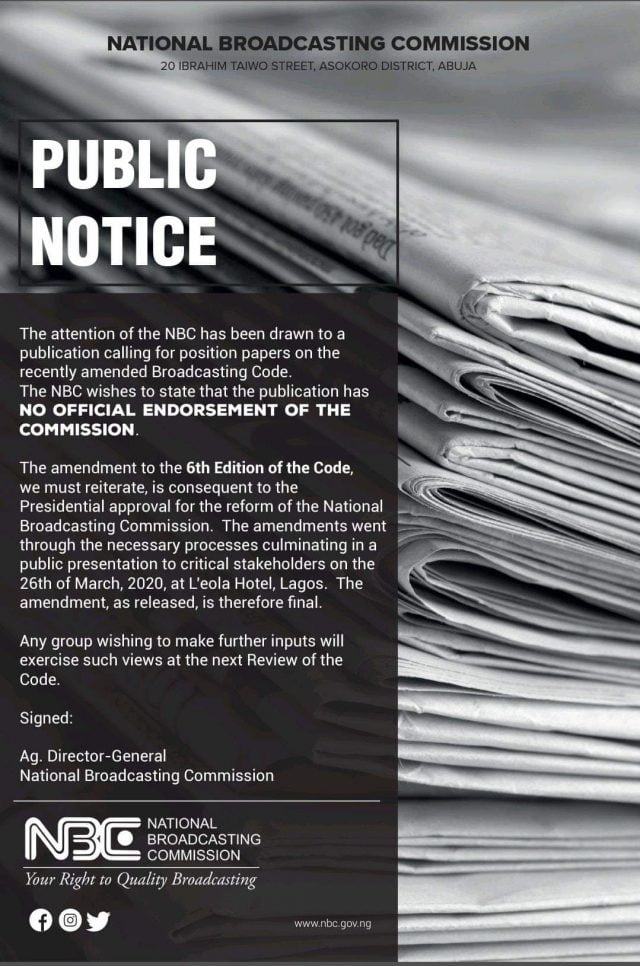