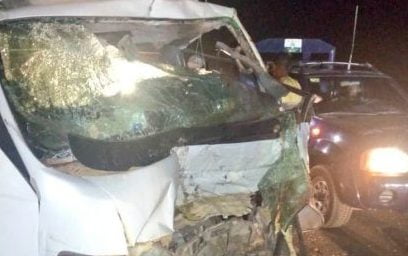 The Nigeria Basketball Federation has sympathised with players of Sokoto State Basketball Association who were involved in an auto crash on Monday while returning from Kebbi State.

The team, who went to neighbouring Kebbi State for a tune up game, was not so lucky on their way home as they a head-on collision with a utility vehicle.

Sadly, Head coach of the team, Elisha Jatau, who was behind the wheels, was not so lucky as he died hours later due to injuries sustained in the crash.

The North West Zonal Representative on the Nigeria Basketball Federation Board, Yusuf Surajo, who briefed the Board about the development, said: “Sad time for the Sokoto Basketball fraternity and the Nigerian basketball community in general.

“We were optimistic before that no life would be lost.

“Many of them sustained various degrees of injuries ranging from broken legs to hip injuries.

“We are sad to hear about Coach Elisha’s death few hours after undergoing emergency surgery.

“These players are currently receiving treatments at the Teaching Hospital, Sokoto, while others have been transferred to Orthopaedic Hospital within the state.

“Thanks to the intervention of the NBBF President, we were able to raise some funds and transfer the affected players to the hospital where they are currently receiving the best of treatments.”

Surajo prayed that the soul of the departed find solace in the bosom of God while wishing other players who are still at the hospital a quick recovery.