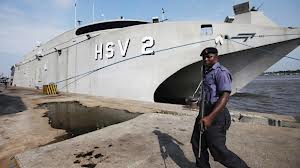 The Nigerian Navy has intercepted a Greek-owned merchant tanker, MT KERALA, purportedly hijacked off the coast of Luanda after “spirited four-day” search in the Gulf of Guinea.
This was contained in a statement issued on Friday in Abuja and signed by Commodore Kabir Aliyu, the Director of Naval Information.
The statement added that the arrest was achieved using the Nigerian Navy remote surveillance system and search patrols by her ships.
It further stated that MT KERALA was currently under Ghanaian custody in the Port of Tema and Interpol operatives were investigating the circumstances of the hijack of the ship.
The statement said that on January 23, the navy received a report from the International Maritime Bureau that MT KERALA had been hijacked off Luanda in Angola.
Aliyu added in the statement: “Subsequent report from IMB on January 25 located her about 50nm South West of Pennington Oil Terminal in Nigeria.
“In a swift response, three patrol vessels were deployed to search for MT KERALA.
“Two other vessels, MT ITRI and a tug boat GARE were reportedly in the vicinity of MT KERALA conducting ship-to-ship transfer of products with KERALA in gross violation of existing regulations in Nigeria.”
The statement stated that MT ITRI was tracked to the Lagos Area and was arrested by a team of NN and NIMASA personnel.
The successful interception demonstrated the efficacy of inter-navy cooperation between Ghana and Nigeria as well as the effectiveness of Nigerian Navy’s remote surveillance capability, the statement said.
The Navy said that the reported conduct of illegal ship-to ship transfer, if proven, constituted a violation of existing regulations in Nigeria.
It further stated that the uncooperative attitude of the ship’s crew and owners after the pirates released the ship as claimed, left much to be desired.
The navy said it was awaiting the outcome of the investigation by Interpol, Nigeria’s High Commission in Ghana, Angola and Ghana Navies.
“It is believed that the ship’s crew would be in a better position to provide useful information on possible collaborators in the purported hijack,” the statement added.