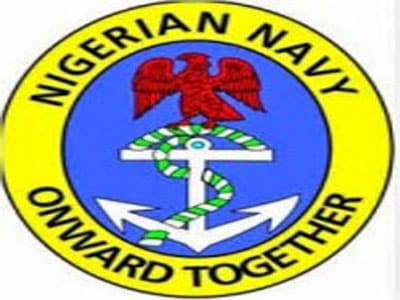 Share
Facebook Twitter LinkedIn Pinterest Email
The Nigerian Navy says it has impounded five vessels and two metallic barges illegally transporting 1,690 metric tons of diesel, in an operation in Rivers State.
The Flag Officer Commanding, Eastern Naval Command, Rear Admiral Victor Adedipe, said on Thursday that the command had handed over the vessels, barges and 76 suspects to prosecuting security agencies in Onne, Rivers State.
The 76 all-male crew members on board the vessels were received by operatives of the Nigerian Security and Civil Defence Corps and the Economic and Financial Crimes Commission.
Adedipe said the vessels: MT Anino, MT Rockfish, MT Blessed, MT Mona I, and MT Leadership were seized at different locations in the state.
The commander said troops on routine patrol caught MT Anino towing a barge with undisclosed quantity of petroleum product suspected to be illegally refined diesel.
He said: “On May 29, MT Anino was caught in the act operating side-by-side with a barge which was filled up with undisclosed quantity of petroleum product suspected to be stolen.
“No fewer than 26 all-male crew members who were on board the vessel were detained.”
Adedipe said troops on March 24 impounded MT Rockfish with 70 metric tons of diesel while MT Blessed laden with about 880 metric tons of diesel was seized on March 31.
He disclosed that MT Mona I was caught on April 20 with 740 tons of diesel while MT Leadership was caught towing a barge with undisclosed quantity of product believed to be diesel.
He said: “MT Blessed had seven crew members on board; MT Rockfish eight and MT Mona I had nine crew members at the time of their seizures.
“A total of 76 all-male crew members from the vessels had been in our custody providing interrogators useful information on the source of the products.
“We have been able to conduct volumetric and forensic analysis of the petroleum product which determined that the signature did not fit into NNPC standard.”
Adedipe warned criminals against attack on oil and gas installations, saying that severe sanctions awaited anyone caught involved in criminality on the nation’s maritime environment.
The FOC said the navy through its Maritime Awareness Capability strategy would insert more gunboats and platforms to cover all nooks and crannies of the sea and creeks.
The EFCC Zonal Head, South-South, Ishaq Salihu, who received vessels – Rockfish, Blessed and Mona I – and 22 suspects, said the commission would conduct thorough investigation into the matter.
Salihu said: “This handover is part of renewed collective effort by security agencies to stop oil bunkering and violent crimes to enable both socio-economic activities to thrive on our waterways.”
Muhammad Haruna, the Commandant, NSCDC Rivers command, assured that the suspects would be arraigned if found culpable of the allegations against them.
Nigerian Navy Rivers State Victor Adedipe
Share. Facebook Twitter Pinterest LinkedIn Tumblr Email