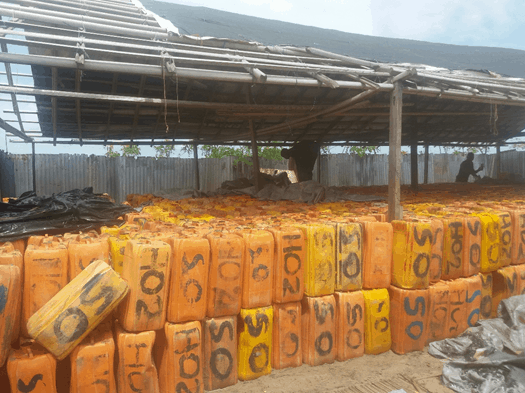 The Nigerian Navy on Monday said it recovered and handed over to the Nigerian National Petroleum Corporation  3,181 jerry cans of petrol – Petroleum Motor Spirit worth N11 million.

The Commander, Nigerian Navy Ship BEECROFT, Commodore Ibrahim Shettima, made the disclosure while speaking to journalists in Apapa, Lagos.
He said the jerry cans were intercepted in Akaraba area, Atlas Cove, Lagos.
He said: “On  July 4, at 16.00hrs, NNS BEECROFT patrol team deployed to the Atlas Cove Island conducted raids at Akaraba area based on intelligence reports.
“The team recovered 3,181  in 25 litres  jerry cans with product suspected to be PMS valued at  N11,500,000.00.
“It was further discovered that the product was sourced from several vandalised points on the NNPC pipeline on the Atlas Cove Island.”
Shettima said that the discovery resulted from the navy’s aggressive patrols.
He said: “The navy under the leadership of the Chief of the Naval Staff, Vice Admiral Ibok-Ette Ibas, is determined to rid our waterways of all forms of criminality.
“NNS BEECROFT is, therefore, committed to assisting NNPC and other agencies of government in dealing with the issues of pipeline vandalism and crude oil theft.”
He warned pipeline vandals and other criminals particularly in the maritime environment to desist from nefarious activities and pursue lawful means of livelihood, warning that the navy would continue to hunt them.
The News Agency of Nigeria reports that the stolen petrol was handed over to the NNPC Atlas Cove Terminal Manager, who refused to mention his name.