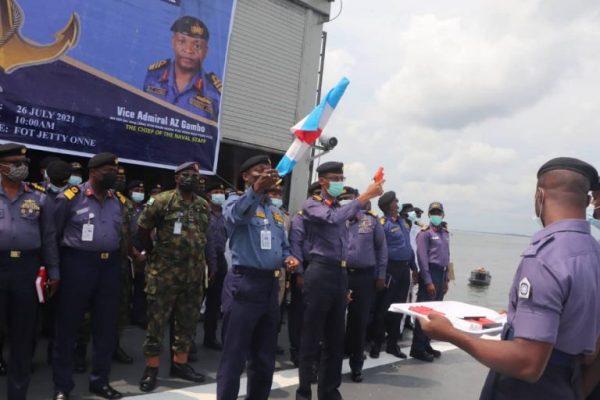 Ibrahim said the sea exercise would also include anti-piracy operations, protection of oil facilities as well as search and rescue operations.

The statement said: “The exercise nicknamed ‘Beni Kekere’ meaning ‘Water Protection’ in Ijaw language aptly captures the primary responsibility of the NN, which is to protect Nigeria’s maritime environment against all threats.

“The exercise  involves a multi-faceted deployment of the two Commands’ assets both at sea and in the backwaters, and is aimed at demonstrating our operational capabilities to securing our contiguous Areas of Responsibility (AoR).

“Our area of responsibility falls within the Niger Delta region in line with the Chief of Naval Staff (CNS) Awwal Gambo’s Strategic Directive 2021.”

Ibrahim said the exercise would equally present an opportunity for the NN to showcase its commitment to the regional security arrangement in the Gulf of Guinea, of which Nigeria is a major stakeholder.

He said: “Nigeria’s maritime domain is dominant in the Gulf of Guinea with its enormous resources and  it remains strategic to our national security and development.

“We are also conscious that these resources have been persistently threatened by piracy, sea robbery, crude oil theft and illegal bunkering as well as illegal unreported and unregulated fishing among other crimes.

“The NN and other security agencies have achieved landmark feats in curtailing these threats, the persistence of the perpetrators requires us to re-strategise in order to consistently deny them freedom of action.”

The FOC said it was in this regard that the Eastern and Central Naval Commands were embarking on the  joint exercise, which he revealed was the first of its kind in recent years.

Ibrahim added: “This is to consolidate on the successes of the ongoing Operation CALM WATERS.

“Concurrently, the operational bases and Naval Security Stations (NSS) in the two commands will conduct clearance operations against criminals’ hideouts, and illegal refineries in the ‘Backwaters’ in collaboration with Op DELTA SAFE.

“I am positive that the joint exercise will add impetus to the CNS aspiration for improved maritime combat readiness of the NN through training.”

He said the sea exercise would equally provide the necessary “bite” to the Nation’s anti piracy law that was recently passed by the National Assembly.

Ibrahim recalled that a Federal High Court passed judgement against 10 notorious pirates arrested by the NN on May 15.

He said: “On behalf of the Eastern and Central Naval Commands, I express our profound appreciation to the CNS for providing the necessary support for the execution of this exercise.

“We shall continue to work assiduously to accomplish the NN’s quest for a safe and secure maritime environment.”

Also, the FOC Central Naval Command, Rear Admiral Kennedy Egbuchulam, said the reason for the maiden joint operations was because criminals at sea do not respect defined sea boundaries.

Egbuchulam said: “Several times, criminals in the pursuit of their crimes used to  criss-cross  the defined boundaries between the two commands.

“The essence is for us to enhance our collaboration and inter operability which will give us  a greater cooperation in the cause of our going after these criminals that operate in our waters.

“Therefore, we will collaborate together such that wherever the criminals are, whether in the Eastern or Central Command, we will be good to get at them.”

Commodore Bankole said five of the ships had already departed on Sunday for the sea exercise and that they would be joined by others.

He addedL “We also have the air assets and elements of the SBS that will be deployed with us and  the exercise is of a continuous nature.

“I thank the FOCs for allowing us to deploy the assets under their command and assure them that the assets will be used justifiably.”