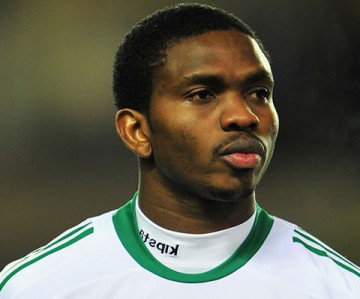 Super Eagles Coach, Stephen Keshi, has listed 32 players to battle for 23 shirts in the Super Eagles’ squad to the 29th Africa Cup of Nations finals in South Africa.
The duo of Obafemi Martins and Osaze Odenwengie are missing in the list for the AFCON.
Following a meeting with the NFF Technical Committee in Abuja on Friday, where he defended the list, Keshi rolled out a squad containing 14 home-based professionals and 18 overseas-based players.
Skipper Joseph Yobo, who also represented Nigeria at the 2002, 2004, 2006, 2008 and 2010 Africa Cup of Nations finals, and is Nigeria’s record international player with 89 caps, tops the list.
Africa’s football-governing body, CAF, has given all 16 teams playing in the final tournament of the 29th Africa Cup of Nations, South Africa 2013 until midnight of January 9, 2013 to submit their final list of 23 players for the showpiece.
Already, the NFF has finalised arrangements for international friendlies with Catalonia and Cape Verde, the former to take place on January 2, while the clash with surprise Cup of Nations finalists, Cape Verde, will come up on January 9 – the same day Keshi will announce his final list.
Following Friday’s meeting, chairman of the NFF Technical Committee, Barrister Chris Green, explained that 14 home boys will travel to Portugal to be joined by 10 overseas-based professionals for the clash with Catalonia on January 2, with the remaining eight foreign-based stars to link up with the squad on January 4.