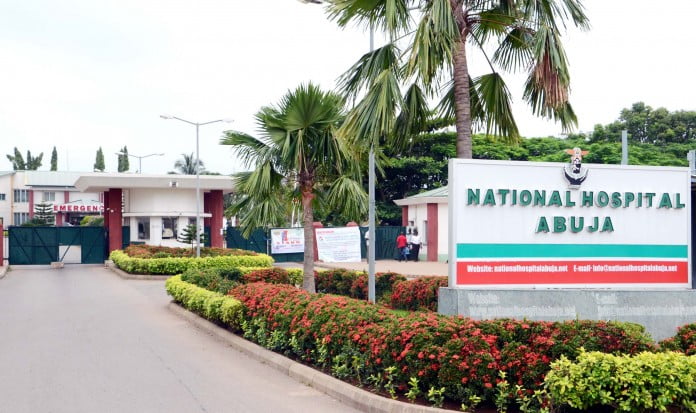 The National Hospital, Abuja says it has been recording high patronage on knee and hip replacement surgeries since 2015.
Dr. Umaru Habila, an Orthopaedic and Trauma Surgeon with the hospital, disclosed this while speaking with the News Agency of Nigeria on Sunday in Abuja.
Habila, also a Chief Consultant and Associate Professor at the hospital, said the increase in patronage was as a result of the economic situation in the country.
Total kneel replacement and total hip replacement is a surgical procedure in which the damaged or worn-out cartilage surface of the articulating bones are shaved and covered by mental and ultrahigh density plastic.
The consultant said the hospital carried out at least two replacement surgeries in a week and about eight to 12 in a month and between 100 and 120 annually.
He attributed the increase to the recent economic recession, which compelled patients to patronise services of medical experts within the country rather than travel abroad for treatment.
Habila said: “The number of patients coming for these surgeries has improved; our skills generally have improved because we have done much more from 2015 to date, than any other years.
“Before now, most of them had dollars; they fly to Egypt, Russia while some of the wealthy ones fly to UK, Germany, America to do their surgeries.
“But most Nigerians are now coming to us for these replacements and it has been good.
“In fact some of them they do it in India but when it becomes complicated they come back to us to handle the complications.
“They cannot go back for follow-up in India and other parts of the world, so we still handle those complicated cases.”
Habila, therefore, called on government and other stakeholders to work hard towards improving health care system in the country and to prevent brain drain in the sector.
The surgeon decried exodus of orthopaedic surgeons relocating abroad because of better working conditions.
He identified brain drain as one of the challenges facing the health sector, which, he said, had affected access to better health service delivery.
According to him, the challenge has also reduced the number of doctors who specialised in orthopaedic and other areas in medical fields.
Habila said: “Currently, we have about 400 orthopaedic surgeons in the country.
“This is a rough figure.
“It could be plus or minus the figure.
“Recently, there was mass exodus of doctors, especially specialists, to the Middle East, UK and America going for greener pasture.
“Meanwhile, our population in Nigeria is currently about 200 million people and that is the number of orthopaedic surgeons serving this population and what makes it even worse, they are concentrated in the cities.
“In Abuja, we might probably have close to 100, Lagos 150 to 200, Port Harcourt will take a chunk and the rest of the states will take the rest.”
Habila, therefore, emphasised the need for more training in specialised fields to enable them carter for the medical needs of the teeming population.
The surgeon also called for improvement in working condition of medical practitioners in Nigeria to curb brain drain.
He said: “We need more specialists, but the opposite is the case.
“Most specialists are deserting the country.
“You have to make people comfortable to retain them, especially people who are marketable, because the world is a global village, communication is perfect.
“News flow where life is better and where these specialists are needed is not hidden.
“You have to make people comfortable wherever they are for you to retain them.”