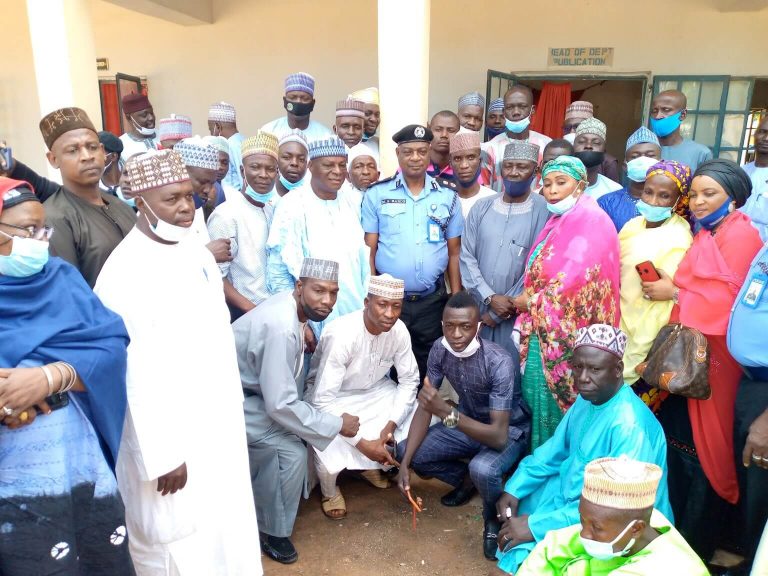 The National Agency for the Prohibition of Trafficking in Persons on Thursday in Abuja reunited two kids, who were kidnapped in Lafia, Nasarawa State, with their parents.

The kids are Sheriff Umar and Abdullahi Adamu, three years old each, said to have been living with their parents.

They lived in a community in Lafia when they were kidnapped by a neighbour in May.

Speaking at the handing over ceremony of the children, NAPTIP Director-General, Fatimah Waziri-Azi, noted that the two kids were from 47 children reported to have been kidnapped across Nasarawa State.

According to her, NAPTIP had received some information that 47 kids were adopted from Lafia in Nasarawa State and sold to different people in Anambra State.

Waziri-Azi said: “We got information from the (Nigeria Security and) Civil Defence (Corps) and we swung into action and officials from our Department of Operations and Investigations were able to track some suspects and arrest them.

“The arrest of the suspects led to the rescue of Sheriff and Abdullahi.

“They are young kids.

“Sheriff and Abdullahi are their birth names, but when they were trafficked across state lines, they were given Igbo names.

“This came to fruition through the support of our sister law enforcement agencies, the police, Department of State Services, NSCDC.

“We felt that it is important to reunite these kids with their parents.

“There is no need to hold them down and further deprive their parents who had lost hope of seeing their kids.”

Waziri-Azi said the suspects would be charged to court while the agency would follow up the matter to ensure that justice was done.

She further said the agency would follow up the trend as well as the money involved in the operations, adding that the arrest of the suspects was the beginning of the boomerang effect for kidnappers.

Waziri-Azi said the evidence on ground will lead the agency to the cartels wherever they are, adding that it was important to let people know the new trend in kidnapping of children.

“The agency is working.

“We are working in partnership with other law enforcement agencies to make sure we succeed.”

Dauda Abbah, the grandfather to one of the kids, Sheriff, told newsmen that he also got the same news from his son some months ago.

According to Abbah, his son told him that the incident happened when he was on his way to the mosque, and that they did all they could to get the little boy until they were invited by NAPTIP.

He said the information the family got was that the boy was trafficked to Onisha, Anambra State and later brought back to Abuja to NAPTIP custody.

Abbah thanked the Almighty God for giving the family the privilege to see the boy again, and also thanked NAPTIP for the support it rendered to the children and the family.

The mother of one of the kids, Abdullahi, Hadiza Musa, who spoke in Hausa language, also told newsmen that she was outside fetching water with her kid on the day the incident happened.

According to Musa, while fetching the water, after some minutes, she noticed that her kid had gone to their neighbour’s house.

She sent the kid’s elder sister to go after him, who then said he was with their neighbour.

She disclosed that after waiting for her son to come back home after some hours, she went to check the neighbour’s house by herself and she couldn’t find the boy anymore.

Musa further told newsmen that she even asked the wife of the suspect the whereabouts of her son, who claimed that the boy had left their house a long time before that.

She advised mothers to always take care of their children to avoid the recurrence of this kind of incidence, adding that she never believed their neighbour could do such a thing to them.