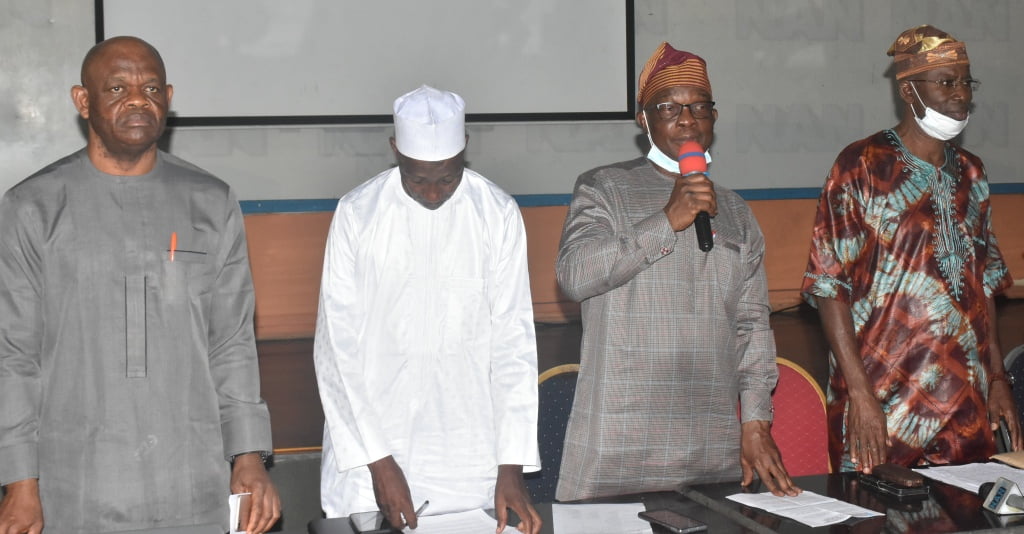 Lagos, June 28, 2021 (NAN) It was a moment of reunion and throwing of banters as reporters and editors of the News Agency of Nigeria (NAN) gathered for an in-house training on Monday in Lagos.

The Managing Director of the Agency, Mr Buki Ponle, opened the three-day programme for all categories of editorial staff in the Southwest zone of the country.

Ponle said that the agency “is on the path of greatness again and resuming as a pace-setter in responsible, positive and solution journalism.

The in-house training, which attracted no fewer than 200 members of staff from the zone, was organised to sharpen the skills and competencies of the agency’s journalists for improved productivity.

The managing director said that right from the take-off of NAN in the 70s, the agency’s founding fathers ensured that training and retraining has been part of the efforts to make the organisation relevant in the changing world of journalism.

He said that the training was in line with the mandate of news agency reportage as well as to uphold the ethics of the profession.

“Today, the quality and quantity of our published copies have improved tremendously.

“NAN is, once again, resuming as the pace-setter, one-stop shop, a beacon and a meteor that is winning public confidence.

“NAN cannot afford to goof because of its unique position as serving all channels of information dissemination.

“But we are not there yet!

“This is the reason for this training; to build in ourselves the needed capacity to deliver flawless stories to our diverse clientele.

“I believe we are on the path of greatness again,’’ Ponle said.

He further remarked that the training was aimed at updating staff’s skills and putting them in line with global best and local practices in responsible, positive and solution journalism.

“This is the first of the series planned for reporters and editors across the country.

A cross section of reporters and editors of the News Agency of Nigeria (NAN) at the opening of a three-day in-house training on Monday, June 28, 2021 in Lagos

“There is no gainsaying that NAN has established a track record of publishing timely, factual, accurate, reliable, objective and impartial information for use by its diverse publics in and outside the country.’’

The managing director, who assumed office on Sept. 1, 2020, noted that his team has focused on cleaning the portal of bad copies and engaging experience retirees in the agency as virtual editors to the delight of NAN subscribers.

He challenged staff of the agency to strive to be more innovative for the organisation to become increasingly relevant.

“In a world where possession of a telephone or other communication gadget confers on the owner, the power to disseminate unbridled information, we must endeavour to distinguish ourselves among equals.

“With fake news, misinformation and disinformation being served daily and being swallowed by gullible citizens, NAN must pride itself as first with correct news.

“NAN must confirm the veracity of every statement through investigation, promote positivity and solutions journalism,’’ Ponle said.

According to him, NAN journalists must at all times defend their fatherland against aggression, be it internal or external.

He said as much as NAN would stand by its stories, it behoved all reporters and editors to work harder, cultivate reliable sources and be wary of rushing to publish first.

The managing director charge NAN editors to remain critical and be more circumspect than ever.

In his remarks, the Editor-In-Chief, Mr Silas Nwoha said that the training was the first to be organised by NAN in decades, saying dearth of training had affected the performance of correspondents.

Silas said that the training was important for the front-line soldiers of the agency to be on top of their jobs and to restore the agency to its pride of place.

He remarked that starting this training in Nigeria’s South West was not by accident.

“As we all know, the South West is the birthplace of journalism in Nigeria.

“Journalism has been thriving in this clime since the past 162 years and Lagos, with the slogan `Centre of Excellence’ is the hub of journalism in Nigeria.”

On the editorial operations of NAN, he said that NAN rating has been improving with more stories being turned out daily, adding “though, the agency is yet to reach the Promised Land’’.

“NAN is now on the path of recovery.

“We have started putting things in the right way; this event signifies the restoration of our company to winning ways.

“The total commitment and direction have been brought back to the agency as records show, from week to week, that our global rating is improving daily,’’ he said.

Earlier in his welcome address, the Head of Lagos Operations, Mr Ephrem Sheyin thanked the managing director for fulfilling his promises on staff training and provision of gadgets to reposition the agency.

Sheyin urged all the editorial staff to make good use of the training to better their performance in the business of news gathering and dissemination.

He also appealed to them to work harder to keep NAN relevant always.

The Chief Facilitator, Mr Dejo Olatoye, said that training was recognition of the fact that “we live in the world of constant changes’’.

“We need to keep abreast of the changes and development,” he said.

Olatoye, who stressed the importance of language in the news business, urged the agency’s journalists to be cautious, clear, thorough and professional in their language use.

He called on NAN reporters to make extra efforts toward serving the interest of the public in news gathering and dissemination.

“To serve the public interest at a news conference, you have to raise some probing questions to get quality news,’’ he said.