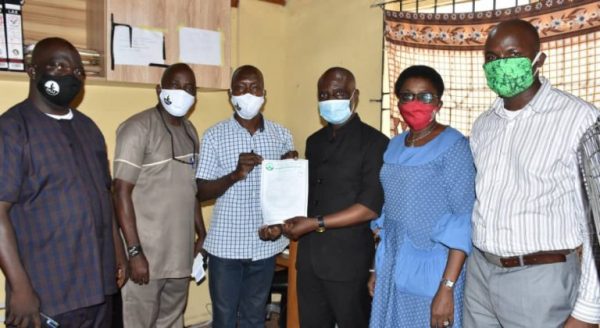 Adeleye Ajayi, a Deputy Editor-in-Chief of the News Agency of Nigeria on Wednesday obtained the expression of interest form to contest the chairmanship position of the Nigeria Union of Journalists, Lagos State Council.

Ajayi, who was at the temporary secretariat of the union in Agidingbi, Ikeja in company of some NAN staff, said he had a genuine passion to serve and transform the union.

He noted: “It is time to restore the hope of our members. It is time to reposition this great union and put it on the path of justice, fairness, unity and progress.

“Journalists in Lagos State deserve better service and we are passionate about elevating the union to an enviable position if given the chance.”

Ajayi, a former National Financial Secretary of the NUJ, said he had a genuine desire for journalists to be fulfilled as well as owning an estate and buildings of theirs – a replica of Arepo Journalists’ Estate.

The NAN editor said: “How to sustain the lives of journalists will be one of my priorities. This is why the union must be brought back on track.

“The issue of professionalism and welfare of journalists are of paramount importance. Added to these as professional body, we must all abide by the ethics of the profession.”

He called for a free and fair election devoid of rancour.

Ajayi was a former secretary of NUJ, NAN Lagos Chapel and a former Ex-Officio of NUJ, Lagos Council.

He contested the state chairmanship position and lost by 16 votes in 2017.

NAN reports that the NUJ election is expected to hold in September.