NAN Board Secretary retires after 35 years in service 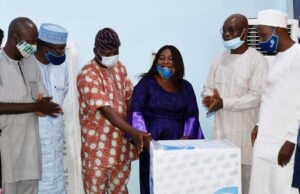 The News Agency of Nigeria Board Secretary and Director, Legal Services,  Stella Benjamin, on Wednesday retired after 35 years of active service.

Speaking at her send off party, NAN Managing Director,  Buki Ponle, said that Benjamin was a successful woman who started as a clerk and rose to become a director as well as legal luminary in her profession.

Ponle described her as light, easygoing and always smiling, urging everyone to emulate her qualities.

“We give God glory for the life of our sister and I am happy to have come across her. She started from the scratch to the pinnacle of her career in service. We started our career in Lagos and here again in Abuja.

“Stella exhibits joy, happiness and smiles always. She has beauty and everything that make up of woman of valour.

“Some people fall on the way side deliberately as a result of choice but I am happy that she worked with her life and she is retiring alive,” he said.

He encouraged her to always identify with NAN and pledged that the agency would continue to remember her.

Also speaking, the Editor-in- Chief, Silas Nwoha, said that Benjamin was steadfast in whatever she does, regretting that she was retiring at younger age.

“Today, being a clerk in NAN, she has become a barrister,” he said.

Margret Iroha, Director, Marketing, described her as a committed staff, adding that she is always there for anyone that comes her way.

“I pray that Lord will bless you tremendously and keep you and your family. This is just the beginning as your latter day will be better,” he said.

Oladele Ojo, Director, Finance and Accounts, said she was a defender and full of ideas that everyone would like to work with.

“Thank you so much for your contributions and part you played in the agency,” he said

A staff,  Rakiye Agbeja, said she was friendly, humble and simple.

“I want to make her my role model, she never rings bell to call me as her secretary and always plays with us without minding our level,” she said

She added that she enjoyed working under her and asked God to reward her.

Responding, Benjamin said she was overwhelmed for the kind words directed to her.

She recalled that in 1985 when she was given appointment letter as a library assistant with SSCE result, she was overjoyed.

Benjamin said she later enrolled into Nigeria Institute of Journalism and later went to Law School.

“Looking back from where I started, it has been God’s mercy and whatever achievement I have made would not have been possible, if not by the support from the agency,” she said.

She encouraged junior staff with WAEC or Ordinary Diploma to use their time and develop themselves academically.