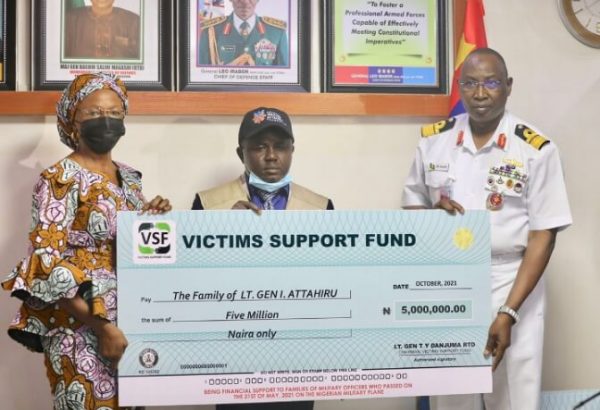 The Victims Support Fund on Thursday donated N23 million to the families of officers of Nigerian Air Force who died in a plane crash on May 21, 2021.

The Executive Director, VSF, Prof. Nana Tanko, disclosed this in Abuja at the symbolic presentation of the cheques.

The cheques were presented to the next of kin of the victims.

Tanko said that the aim of the donation was to support the education of the victims’ children.

The News Agency of Nigeria reports that the former Chief of Army Staff, Lieutenant General Ibrahim Attahiru, and 10 other officers died in the ill-fated NAF air crash on May 21 in Kaduna State.

Tanko said: “The Chairman of Victims Support Fund, retired Lieutenant General T. Y. Danjuma, has approved the support to the families of the deceased heroes to ameliorate their living conditions following the death of their breadwinners.”

According to her, the VSF has over the years enjoyed the support of the close working relationship with the Nigerian Armed Forces in its mission of rebuilding lives of victims of insurgency and terrorism across the country.

She added: “The Victims Support Fund, under the Chairmanship of General TY Danjuma has ensured the judicious management of its resources mobilised to provide succour to victims of terrorism and insurgency in Nigeria since 2015.

“VSF is committed in rebuilding lives and restoring hope to victims of terrorism and insurgency in the country.”

In his response, the Chief of Defence Staff, General Leo Irabor, appreciated the management of Victims Support Fund for the kind gesture.

On behalf of the beneficiaries, Oluwatoyin Olayinka, while thanking the management of the VSF and the Nigerian Air Force, said that the support would go a long way in ameliorating their plights.