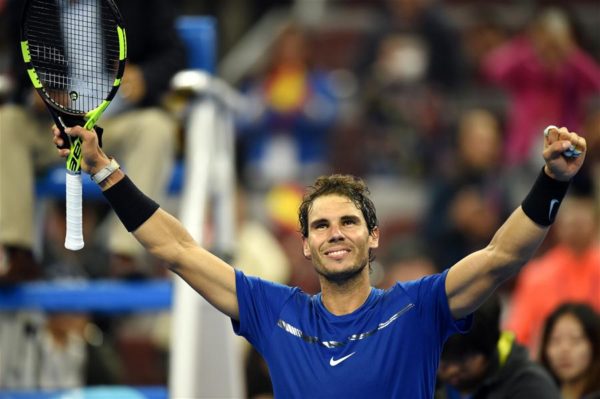 Tennis world number one, Rafael Nadal continued his quest for a maiden Paris Masters title when he survived a second set blip to beat Uruguay’s Pablo Cuevas 6-3 6-7(5) 6-3 and reach the quarter-finals on Thursday.
The Spaniard, who made sure he will end the year as world number one by reaching the third round, had to dig deep to see off Cuevas and set up a meeting with Serbian qualifier Filip Krajinovic.
“It’s been a long year. It’s been a very successful one. (I‘m) very happy for everything,” said Nadal, who this year won the French Open and the US Open.
”And it is normal that at the end of the season after all the things that happened and all the season, all the matches I played with high intensity, it’s normal that I have a few body issues.
“It’s nothing strange. Something that (is) completely normal and (I have) accepted and just try to fight.”
David Goffin was knocked out in the third round but still became the first Belgian to qualify for the season-ending Tour finals after France’s Lucas Pouille lost to American Jack Sock.
Only one spot is left for the November 12 to 19 eight-man event at the O2 in London and Juan Martin del Potro will clinch it if the Argentine, who defeated Dutchman Robin Haase 7-5 6-4, reaches the last four.
The 13th seed converted all his break points against Haase to set up a meeting with John Isner. Del Potro is hoping to keep up his recent run, when he has contested two finals and a semi-final in his last three tournaments.
“It’s extra motivation to me,” said Del Potro.
“It’s going to be a good battle next round trying to qualify for London. Of course, I would love to reach London once again. It could be a fantastic moment for me. But it’s still a really hard challenge to me.”
As the season winds to a close, fatigue continued to take its toll as fifth seed Dominic Thiem and sixth seed Grigor Dimitrov were both knocked out in the third round.
Austrian Thiem lost 6-4 6-4 to Spain’s Fernando Verdasco while Bulgarian Dimitrov fell 7-6(10) 5-7 7-6(3) to American Isner.
Third seed Marin Cilic, however, was never in danger against Spain’s Roberto Bautista Agut as the Croatian advanced with a 7-6(4) 6-2.