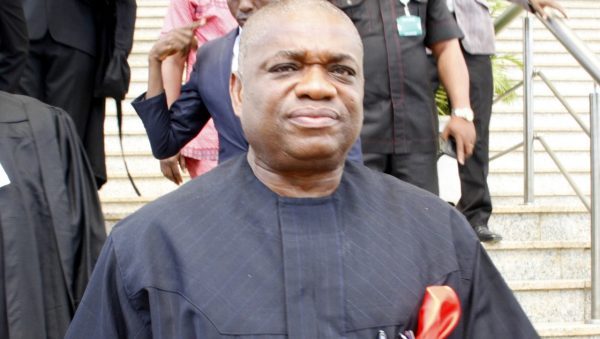 Lawyers of former Governor of Abia State and Chief Whip of the Senate, Dr. Orji Uzor Kalu, have concluded arrangements to to file a stay of execution and bail pending appeal on his behalf following his conviction over charges of N7.2 billion fraud brought against him and two others by the Economic and Financial Crimes Commission.
Kalu was on Thursday sentenced to 12 years imprisonment by Justice Muhammed Idris of the Federal High Court, Lagos.
The Director of Finance of Abia State while Kalu was governor between 1999 and 2007, Jones Ude Udeogo, and a company, Slok Nigeria Limited, were also convicted by Idris.
Reacting, one of Kalu’s lawyers, Chief Charles Ewelunta, said the legal team had obtained the Certified True Copy of the judgement and would file an appeal almost immediately.
Ewelunta, however, said the team will file applications for a stay of execution and bail pending appeal.
He said both the stay of execution of the judgement and bail applications are permissible in law.