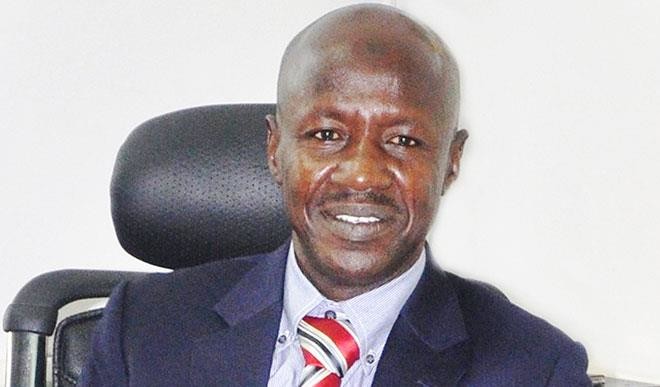 The Sun Newspapers told an Ikeja High Court in Lagos that they do not  have a copy  of the Department of State Security report which allegedly linked Ibrahim Magu, the Acting Chairman of the EFCC to two properties in Maitama, Abuja.
News Agency of Nigeria reports that an article published by the Sun Newspapers on March 25, 2017 titled “Magu Under Fresh Probe Over Two Abuja Mansions” was alleged by the media house to be based on the DSS report.
A defence witness, Frances Okonkwo, who is a lawyer employed by The Sun Newspapers made the disclosure at an Ikeja High Court during proceedings of a N5billion libel suit Magu filed against the media house.
Okonkwo while being cross-examined by Mr Wahab Shittu, the counsel to the claimant, said that a copy of the alleged DSS report was not in the possession of The Sun Newspaper.
“We do not have the DSS report. It is not in our custody,” she said.
Questioning Okonkwo, Shittu said: “In the first paragraph of the story, there is no mention of Magu’s wife but the publication is predicated on an investigative report of two properties allegedly linked to his wife.
She said: “What is the name of his wife linked to the property, what is the address of the property in Danube St., Maitaima that was being investigated, are you prepared to tell My Lord the source of your highly placed source?
“The other property in Missouri St., under whose name were these properties registered, from your investigative report, from whom were these properties bought by Magu’s wife?”
Okonkwo responded saying “I do not know the name of Magu’s wife, under the law as a media organisation, we are not obliged to reveal the source of our investigation”.
She added: “I do not know under whose name those properties were registered, the name of Magu’s wife was not disclosed in the report.
“The report was from a source of the DSS a body empowered to do such investigations, and the story was published based on existing facts.”
Okonkwo under cross-examination said that the titles of the two properties were not verified by Sun Newspaper at the Land Registry and that a Certified True Copy of the alleged DSS report was not obtained by the media house.
She said she was unaware of the location of Magu’s alleged hidden assets.
Okonkwo noted that the assertions that Magu had a recorded a low level of EFCC criminal conviction and that he associated with corrupt high level individuals were contained in the alleged DSS report.
Okonkwo told the court that she did not have a copy of the Senate proceedings where Magu’s confirmation as the EFCC boss was rejected, she also said that Magu was not contacted by the Sun Newspapers to give his side of the story.
She also noted that The Sun Newspaper circulates all over the country and that the media house has an online platform which is accessible worldwide.
In response, Shittu: “I put it to you that you have no proof at all of what you published against the claimant, it was reckless and malicious.
“The publication was a crude attempt to destroy the claimant before the president of the Federal Republic of Nigeria. You were doing a hatchet job on behalf of those being investigated by Magu.”
Okonkwo denied all Shittu’s allegations, she said “It is not true we have a moral and ethical obligation to members of the public”.
Earlier during proceedings Charles Ewelunta, the counsel to Sun Newspaper while opening their defence informed the court that the media house will be calling only one defence witness (Okonwo).
When Okonkwo was called to the stand, a deposition she swore to dated July 25, 2017 was presented in court as evidence.
Justice Doris Okuwobi adjourned the case until October 11 for adoption of final written addresses.
NAN reports that the acting EFCC Chairman is suing the publishers of the Sun Newspaper, claiming N5 billion in damages over a publication that alleged that the DSS had uncovered two houses in Maitama, Abuja which were traced to his wife.
The EFCC boss is also demanding that the Sun Newspapers publish an apology and retract the allegedly libellous publication.
Magu while giving evidence during proceedings on December 17, 2018, denied owning two houses in Mataima, Abuja.
He had said: “The publication is totally false. Even if I have the money, I wouldn’t buy houses in Maitama.
“They said the houses are located in the Darrubbe and Missouri, Maitama and that they belong to my wife.
“My wife Fatima Yakaka Magu is a civil servant and cannot afford to buy houses in Maitama.
“I am an international man and the publication has damaged my reputation. The name Magu does not only end with me, the publication caused a whole lot of trauma for my lineage.”