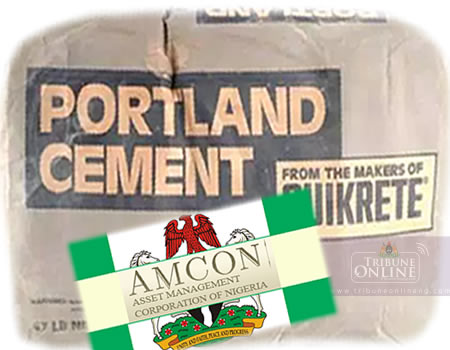 The Asset Management Corporation of Nigeria has taken possession of Gateway Portland Cement Limited factories over debt of nearly N3 billion.
The corporation in a statement issued in Lagos on Friday said the possession followed an injunction against Gateway Portland Cement granted by the Federal High Court Abeokuta Division, Ogun State.
The statement said AMCON’s Receiver, Charles Adeogun-Phillips, had formally and successfully taken possession of Gateway Portland Cement factories and facilities located in Abeokuta and Mowe areas of Ogun State.
It added that the debt had been a subject of litigation for some time now.
The statement said the court in the ruling restrained Gateway Portland Cement and the promoters whether by themselves, their agents, privies, or whosoever howsoever from moving, into the firm.
It also restrained them from withdrawing money from or with any bank or financial institutions that hitherto does business with the cement company excluding in Nigeria pending the hearing and determination of the suit to be filed by the applicants for recovery of its outstanding debts.
The order also restrained the company and the promoters by themselves, their agents, servants and, or their privies from interfering with or otherwise obstructing or frustrating the receiver appointed by AMCON in performing his duties.
It also directed the company and the promoters to deliver to the receiver appointed by AMCON all the charged assets of the company in their possession forthwith.
AMCON in the statement maintained that there would be no rest for recalcitrant debtors of the corporation like in the case of the promoters of Gateway Portland Cement Ltd.
The statement said that the only way AMCON mandate could be realised within the timeframe of the assignment and in the interest of the country’s economy was to recover debts owed.