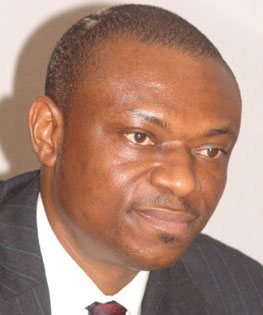 A Federal High Court in Lagos on Tuesday held that the Rules of Practice Direction were not binding on a former Managing Director of defunct Bank PHB, Francis Atuche.
In a ruling, Justice Saliu Saidu held that Section 5 of the Rules was not enforceable on defence.
Saidu said that the provision offended Section 36 of the 1999 Constitution as it tended to undermine the accused person’s rights.
Atuche is standing trial alongside Charles Ojo, a former Managing Director of defunct Spring Bank Plc, on an amended 45-count charge of N125 billion fraud.
They were re-arraigned by the Economic and Financial Crimes Commission on February 20, following a re-assignment of the case to Saidu.
After their re-arraignment, Prosecution Counsel, Kemi Pinhero (SAN), applied for a date for mention.
Pinhero said that in line with the Rules of Practice Direction, the prosecution was bound to ensure speedy disposal of criminal cases.
Citing the provisions of Rule 6 of the Practice Direction Rules, Pinhero argued that all criminal cases handled by the EFCC ought to be dealt with expeditiously.
He, therefore, urged the defence to reply to processes filed by the prosecution so as to accelerate trial.
Chief Anthony Idigbe (SAN), Counsel to Atuche, however, submitted that following practice direction would reveal the strategy of the defence.
Idigbe urged the court to discountenance the prosecution’s reliance on practice direction, adding that no burden should be placed on the defence.
According to Idigbe, the power of the court’s chief judge was limited by the provisions of Sections 4 of the Criminal Procedure Act.
Osahon Idemudia, Counsel to Ojo, aligned himself with the submissions of Idigbe.
The judge thereafter ordered the parties to address the court on the issues.
The prosecution and defence counsel adopted their written submissions before the court on June 17, while the court reserved its ruling.
In the ruling on Tuesday, Saidu held: “Section 5 of the Rules of Practice Direction requires the defence to disclose its case before the commencement of trial.
“I hold that the section is not enforceable on the first accused.
“Substantial justice is not to be sacrificed on the altar of expeditious determination of cases; just determination of cases is more important.”
The judge adjourned the case to November 18 for continuation of trial.
The accused were first arraigned in 2009 before Justice Akinjide Ajakaiye.
Ajakaiye had granted them bail in the sum of N50 million each with two sureties in like sum.
They were re-arraigned before Justice Binta Murtala-Nyako on February 3, 2012 and subsequently before Justice Rita Ofili-Ajumogobia on January 16, 2013.
Both judges had adopted the bail terms granted by Ajakaiye.
In the charge, the accused were alleged to have granted credit facilities, manipulated shares and committed general banking fraud to the tune of over N125 billion.
The offence is said to have contravened the provisions of Sections 7(2) (b) of the Advanced Fee Fraud Act, 2004 and Sections 15(1) of the Failed Banks (Recovery of debts) and Financial Malpractices in Banks Act, 2004.
It also contravenes the provisions of Section 516 of the Criminal Code Act, Cap C38, Laws of the Federation, 2004, as well as Section 14 (1) of the Money Laundering Prohibition Act, 2004. (NAN)
However, the accused pleaded not guilty to all the 45 counts.