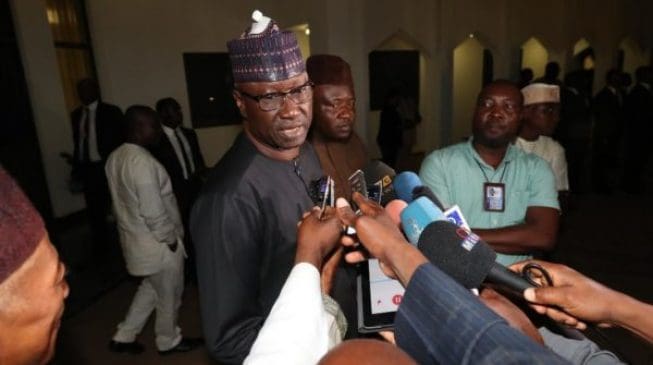 The Secretary to the Government of the Federation, Boss Mustapha, has described his re-appointment as a call for rededication and recommitment to the course of Nigerian nationhood.
Mustapha stated this on Monday in Abuja while briefing his staff and journalists on his official resumption to office after his reappointment by President Muhammadu Buhari.
The News Agency of Nigeria recalls that Mustapha was re-appointed along Malam Abba Kyari, the Chief of Staff to the President, on July 5, to continue in the discharge of their duties to the country.
Mustapha appreciated Almighty God and the President for the confidence reposed on him to continue serving the nation in that capacity.
He said: “For me, this is a very humbling experience and it caused me to think and reflect deeply in the last two days as to what qualifies me to come to this office.
“I looked around, I said well, probably I am the list qualified, I believe truly that the hand of God is upon everything that happens in a man’s life.
“Indeed I express my gratitude to God Almighty first and to Mr President for reposing this level of confidence in me.’’
According to him, his re-appointment is not about to take this confidence lightly, adding that it is an honour, task placed on him to move forward and reflecting on issues affecting Nigeria in order to achieve good governance.
He said: “It is a call for a rededication, recommitment to the course of the Nigeria nationhood and I will bring to bear everything that I need to do.
“I will work harder than I worked in the last one and a half years that I served in this office, be more committed and be more zealous for the things of Nigeria.
“And to help Mr President to achieve his desire of transforming this country to take it to the next level.’’
The SGF advised his staff to live up to expectation, saying they are expected to exhibit the spirit of excellence on what they do to provide hope for the government.
Mustapha added that OSGF was the next centre of government where government policies, programmes, projects were coordinated and implemented to provide enabling environment for the government to achieve its desires.
Dr Habiba Lawal, the Permanent Secretary, Ecological Department, and Dr Amina Shamaki, the Permanent Secretary, Special Services OSGF, who spoke on behalf of the staff, had earlier pledged maximum support for Mustapha.
Meanwhile, Governor Muhammad Yahaya of Gombe State, who visited the SGF, also congratulated Mustapha on his re-appointment.
On the expectations of his administration in Gombe state, Yahaya assured that he would work in line with Buhari’s ideals to fight corruption and take the state to the next level agenda.