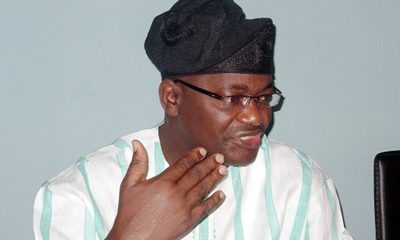 The governorship candidate of the African Democratic Congress in Ogun State for the 2019 election, Gboyega Nasir Isiaka, has clarified statements credited to him on what he will do with Mission Schools if elected.
Isiaka offered the explanation in a statement he personally signed on Tuesday.
He said: “My attention has been drawn to a news headline, ‘I will return mission school to owners in 2019 – Isiaka,’ published by one of the major national dailies; and which has elicited discussions and divergent opinions from many stakeholders of Ogun State.
“While many applauded the purported decision, some also disagreed. All opinion on this matter count and I truly respect them and it makes me quickly feel the weight and burden of expectations of the people from the next administration, hopefully under my watch.
“However, let me quickly state here that though not precisely reported, my statement is largely an intention borne out of the burning desire to effect a revamp of our educational system; and it was not as definitive as was reported.
“‘Excellence in Education’ is topmost on our 7 Steps to Greatness manifesto and we intend to launch a comprehensive package on how to turn around the obvious qualitative and quantitative deficit and stop the decay in our educational system in Ogun state; and in the process secure a better future for our children.
“Amongst the options being considered is to encourage the private sector, NGOs, religious bodies, alumni association and other varied interests in our educational sector; within the policies and guidelines of government in addition to the determination to expand and enhance educational infrastructure and facilities across the state.
“This suffices to say that a comprehensive programme to guide our education plan is meant to be developed from an education summit where all stakeholders will express their interest; and a key component of that event will be conversations around the mission schools which I hope in the end will leave everyone satisfied and Ogun State better for it.
“The debate the headline has generated in the last 48 hours had further confirmed our position that all is not well with our education sector in Ogun State. The dilapidating structures and decay in infrastructure that made some of our public schools look like piggeries needs urgent attention.
“The morale of teachers are down because of lack of motivation and encouragement from a government that sees no reason to enhance human capital and the resultant effect is the low quality in education as shown in various external examinations in the state.
“Indeed our education sector is in dire straits and a State of Emergency will be declared – part of which is the planned summit. More importantly, ogun people should be rest assured that none of our policies will burden the people, rather, it will bring ease and a life of abundance to all.
“I remain with the people and like I always say, they shall be the focus of all our administration’s decisions. Therefore, I urge Ogun State people, teachers, students and all industry players in the education sector to ignore negative insinuations from mischief makers who hoped to take advantage of the debate to score very cheap political points.
“I thank everyone that has contributed to the debate and it shows that we are all preparing for a peoples government that will usher in the Geater Ogun State we all desire.”