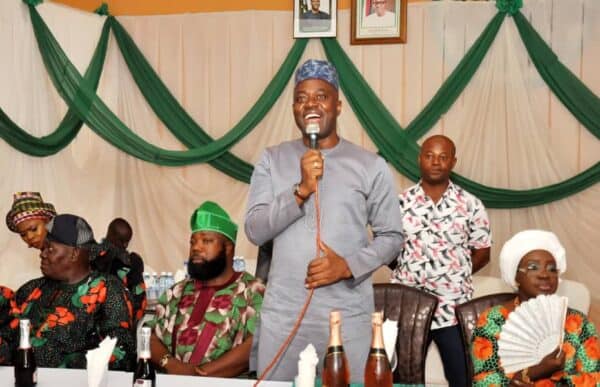 Governor Seyi Makinde of Oyo State says his government will patronise indigenous contractors to enable them contribute their own quota toward the development of the state.
Makinde stated this on Tuesday while addressing the people of Ogbomoso during a ‘thank you’ visit to the town.
He said that qualified and competent indigenous contractors would be given topmost priority in the award of contracts as soon as his government commenced the process.
The governor, who said that his administration had not awarded a single contract since its assumption of office, ruled out the possibility of giving contracts to people outside the state.
He said: “Instead, contracts will be awarded to citizens of the state so as to improve our economy and make the indigenous contractors partake in the running of the state.”
Makinde further implored those who ought to have been given appointment by his government but who had yet to be appointed to be patient, saying that the dividends of democracy would soon get to all and sundry.
He said: “I know quite well that many people among you have been eager to get appointments from the government. I will just implore you to be patient as it will soon get to your turn.”
The governor reiterated his commitment to running an all-inclusive government that would carry everyone along in the decision-making process.
He assured the people of the state that their welfare would be paramount to his administration and that he would run the affairs of the state with the fear of God.
Makinde lauded the people of Ogbomoso for their support, especially during the last election, which he said enhanced his victory and solicited for its sustenance.