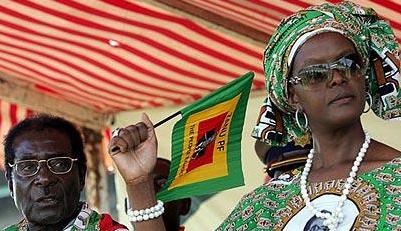 President Robert Mugabe of Zimbabwe and his wife Grace are “ready to die for what is correct” and have no intention of stepping down, his nephew, Patrick Zhuwao, said.
Speaking to Reuters from a secret location in South Africa, Zhuwao said Mugabe had hardly slept since the military seized power on Wednesday, but his health was otherwise “good”.
The leaders of Zimbabwe’s ruling ZANU-PF party are set to meet on Sunday to approve the dismissal of President Robert Mugabe, the only leader the southern African nation has known since independence 37 years ago, two party sources have said.
An extraordinary meeting of the party’s central committee is expected to convene around 10:30 a.m. (0830 GMT) to consider removing the 93-year-old, four days after a military seizure of power ostensibly aimed at “criminals” within his entourage.
Separately, state television said Mugabe would meet military commanders on Sunday, quoting the Catholic priest who has been mediating in negotiations with the president.
On Saturday, hundreds of thousands of people flooded the streets of Harare, singing, dancing and hugging soldiers in an outpouring of elation at Mugabe’s overthrow.
ZANU-PF’s central committee is also expected to reinstate Emmerson Mnangagwa as party vice-president, resurrecting the political career of the former security chief, nicknamed The Crocodile, whose sacking this month triggered the military’s intervention.
Mugabe’s wife, Grace, will be fired as head of the ZANU-PF Women’s League, the sources told Reuters, completing the demise of a 52-year-old former government typist who just a week ago stood in pole position to succeed her husband after Mnangagwa’s dismissal.
The pair’s stunning downfall is likely to send shockwaves across Africa, where a number of entrenched strongmen, from Uganda’s Yoweri Museveni to Democratic Republic of Congo’s Joseph Kabila, are facing mounting pressure to step aside.
In scenes reminiscent of the downfall of Romanian dictator, Nicolae Ceausescu, in 1989, men, women and children ran alongside the armoured cars and troops who stepped in this week to oust the man who has ruled since independence from Britain in 1980.
Under house arrest in his lavish ‘Blue Roof’ compound, Mugabe has refused to stand down even as he has watched his support from party, security services and people evaporate in less than three days.
On Harare’s streets, few seemed to care about the legal niceties as they heralded a “second liberation” for the former British colony and spoke of their dreams for political and economic change after two decades of deepening repression and hardship.
“These are tears of joy,” said Frank Mutsindikwa, 34, holding aloft the Zimbabwean flag.
He added: “I’ve been waiting all my life for this day. Free at last. We are free at last.”
The crowds in Harare have so far given a quasi-democratic veneer to the army’s intervention, backing its assertion that it is merely affecting a constitutional transfer of power, which would help it avoid the diplomatic backlash and opprobrium that normally follow a coup.
The US, a long-time Mugabe critic, said it was looking forward to a “new era” in Zimbabwe, while President Ian Khama of neighbouring Botswana said Mugabe had no diplomatic support in the region and should resign at once.