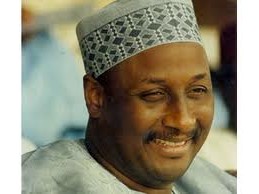 Alhaji Ademu Mu’azu, the National Chairman of the Peoples Democratic party, on Saturday said he needed the blessing of the Emir of Bauchi, Alhaji Rilwanu Adamu, to succeed in his national assignment.
Mu’azu, an indigene of Bauchi, told the Emir when he paid him a courtesy call in Bauchi, that his new assignment was tasking, considering the current challenges of the party.
He therefore appealed for prayers from the Emir, stressing that “without the blessings of the royal father, l may not make much impact.”
He added: “I need your prayers and blessings to succeed in this very tasking national assignment.
“Bauchi is my home and you are our farther.
“As such, I am in dire need of your support to succeed.”
Mu’azu also called on the Emir to help him thank Governor Isa Yuguda of Bauchi State, who nominated and supported his candidature for the exalted position..
The chairman said Yuguda was his childhood friend and that their relationship had been cordial.
He said: “I have enjoyed a very cordial relationship with Yuguda, right from childhood.
“I don’t see how our political differences in the past should come between us.
“We never had any reason to be political enemies even when he defected to the defunct ANPP and obtained the governorship ticket of the state in 2007.
“I have always given him my political support and will continue to do so even as the National Chairman of his party.”
In his remarks, Yuguda, who accompanied Mu’azu to the Emir’s palace, also pledged his unflinching support to the National Chairman, adding: “The success of Muazu is the success of Bauchi State and the entire North East zone.”
He called on all stakeholders in the state to rally behind the new chairman, to enable him succeed and move the party forward.
Responding, the Emir assured the chairman of his support and that of his traditional council.
He urged him to carry everybody along if he hoped to succeed and meet the expectations of those who supported him.