Singer, Mr. 2Kay, has announced that he will be hosting the city of Port Harcourt and its environs to a night of great music and fun as he will be having his concert tagged: “The Elevated Concert.”
The event, which is being put together by Grafton Entertainment will hold on June 17, 2018 at Aztech Arcum in the heart of Port Harcourt.
The Elevated Concert will also feature other A list artistes.
On April 2, 2018, Mr. 2Kay will flag off a singing/dancing competition where he will be giving away $2,000 to two persons in Port Harcourt.
According to him, the initiative is a way of giving back to his starting foundation in the music industry.
He said: “Call it my little way of giving back to a place where I started my career.
“The support from the South has been superb from the people.
“The winners of the competition will also have the opportunity to share the stage with me during the elevated concert.”
To participate, interested fans are expected to post a minute video of themselves singing or dancing to their favourite song from Mr. 2Kay’s latest album – ELEVATED.
The videos are to be posted using the hashtag #ElevatedConcertph18 and participants must be following Mr. 2Kay on Twitter (@mr_2kay), Instagram (@mr.2kay) and Facebook (@iam2kay).
Media partners for this competition are Rhythm 93.7FM PH and Beat99 FM PH.
They will be dishing more details and updates on a daily basis on the competition.
Mr. 2Kay released his sophomore album on February 11, 2018 and it climbed from three to the number one position on iTunes album chart.
The album was on number one for three weeks.
Since the release of the album, he has performed at the ongoing Big Brother Naija eviction show and had a media tour in Kenya with several appearances.
Mr. 2Kay has just concluded another media tour in Port Harcourt and will be heading to the UK for another media round this weekend. 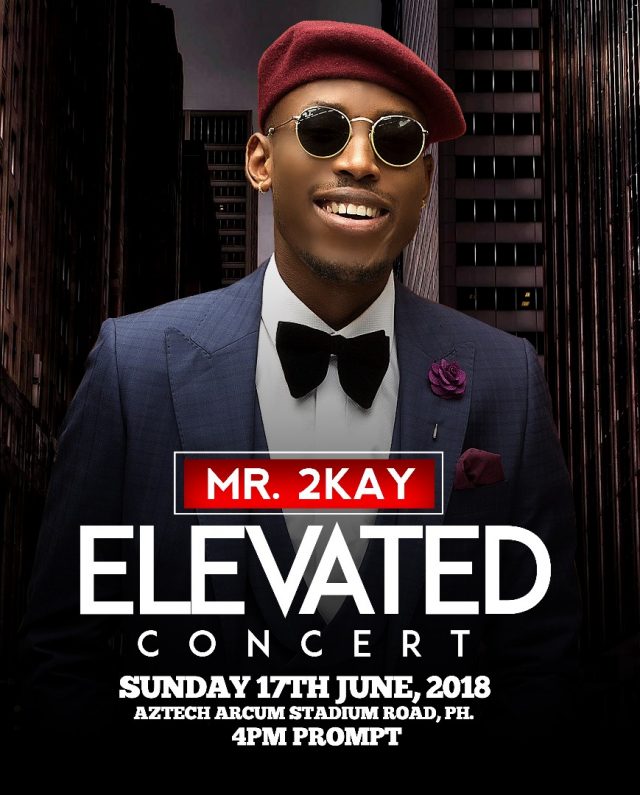 Police to Burna Boy: Turn yourself in for robbery attack on Mr. 2Kay

2023 Presidency: I have no interest, it should return to South – El-Rufai