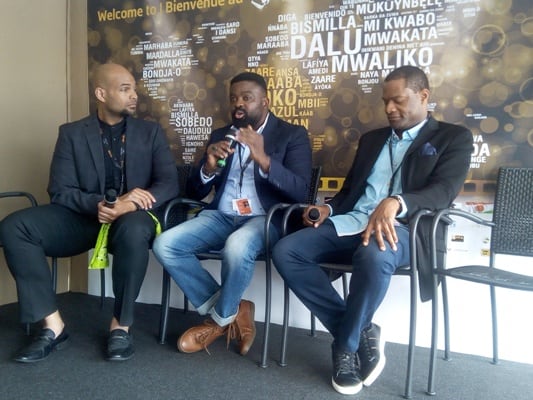 Share
Facebook Twitter LinkedIn Pinterest Email
Kunle Afolanyan, veteran Nigerian filmmaker, says there is so much segregation in filmmaking between the Francophone and Anglophone countries in Africa.
Afolayan expressed concerns as African filmmakers under the “Pavillon Afriques” at the 2019 Cannes Film Festival (Festival de Cannes) called for co-production of films to boost distribution of African content across the continent.
The News Agency of Nigeria reports that the filmmakers made the call during a panel discussion at the ongoing Cannes Film Festival holding from May 14 to 25 in France.
Afolayan said: “There is so much segregation in filmmaking between Francophone and Anglophone countries in Africa, and filmmaking should not even be based on the language we speak.
“For example, in producing the acclaimed film, The CEO, I brought actors from Morocco, Kenya, South Africa, Côte d’Ivoire and Nigeria, and that made the film to gain acceptance in those countries and across Africa.
“If different countries have a representation in a particular film, it will boost its distribution because it will be accepted by the audience of the countries.”
Ijeoma Onah, Founder of Nigerian International Film Summit, said co-production of films would bridge the gap in telling the African story to the rest of the world.
Onah said: “It is time we tell our story in our own way to the rest of the world, and that will be very possible if we work together in the filmmaking business.
“The African filmmaker needs to keep improving and that can be best achieved through collaborations.”
Bonolo Madisakwane, a South African Filmmaker and Distributor, said: “West Africa, which Nollywood represents, has a lot of contents, which other parts of the continent and the world need.
“However, there is need for business treaties among countries for easy distribution of these rich contents.
“Investors, filmmakers and distributors must work together to develop a strong movie industry for Africa.”
Mehret Mandefro, Ethiopian Filmmaker and TV Presenter, said: “Nollywood is a role model in filmmaking that other African countries need to work with to grow their industry.
“Nollywood is miles ahead of others, but other countries can learn from it.
“Others can take a lift from Nigeria because stakeholders are very key to each other as filmmaking cannot be done in isolation.”
Mandefo therefore urge filmmakers to collaborate and build strategic partnership toward the collective growth of the continent’s film industry.
Thomas Adedayo, Executive Director of the National Film and Video Censors Board, said that filmmakers needed to do more to maximise opportunities the African film industry offers.
Thomas, a member of the Advisory Board of the Pavillon Afriques, noted that market for African contents was growing within and outside the continent and therefore urged filmmakers to work together for enhanced distribution.
He said: “Even in this digital era, records have shown that DVDs sales still strives in many parts of Africa, and that clearly shows that the market for it is still there.
“Nigeria government is committed to providing the enabling environment and the ease of doing business, so investors are welcomed.”
Also, Prudence Kolong, Communications and Operations Director of the Pavillon Afriques, commended participating countries, explaining that the pavillon was to provide stakeholders with unprecedented access to the African film industry resources and professionals.
Kolong said: “With this project, we are creating a unique venue for movie trade and promotion that outlines the diversity and plurality from Africa and its diaspora film and television content.
“Our ambition is to become an exclusive business platform where film industry stakeholders meet, discuss, trade, make deals and take advantage of the unique atmosphere of the Festival de Cannes.”
Pavillon Afriques is in its first year at Cannes, with the theme: “Connecting the Past, Present and Future.”
It gathers filmmakers and other stakeholders to discuss the business of Filmmaking in the African continent and among its diaspora.
According to the filmmakers, Africa has rich contents as it has rich and interesting stories to tell the world, but needed to effectively distribute the story from home through co-production.
NAN reports that the NFVCB is leading the Nigerian delegation to the Pavillon Afriques of the 72nd Cannes Film Festival to join a line-up that includes participants from African countries of Uganda, Kenya, South Africa and Tanzania.
Others include Ethiopia, Rwanda, Togo and Djibouti, among others, including Jamaica and other African diaspora countries.
NAN.
africa Filmmaking Kunle Afolayan Pavillion Afriques Segregation
Share. Facebook Twitter Pinterest LinkedIn Tumblr Telegram Email