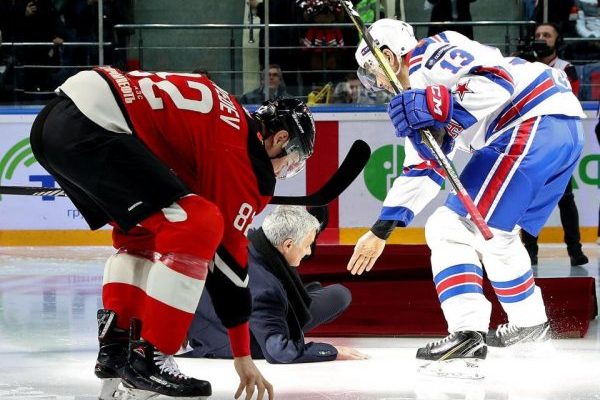 Jose Mourinho’s fall from grace continued on Monday after he took an unfortunate tumble at an ice hockey game in Russia.
The Portuguese was invited as a special guest for the match between SKA and Avangard at the Balashikha Arena – where he would commence the action by dropping the first puck of the game.
But the grand opening did not go as planned as The Special One slipped up on the red carpet as he departed the rink.
The 56-year-old quickly lost balance as he started his exit and fell flat on his backside before being aided to by one of the players.
And it’s not the first time Mourinho has been involved in an unfortunate public fall.
In September the Portuguese fell flat on his face after trying to make a quick getaway from England’s UEFA Nations League defeat to Spain.
It seems that Mourinho can steal the limelight wherever he goes, even if he doesn’t currently have a job in football.
Last month, he also made the headlines with his punditry work for beIN Sports in Qatar.