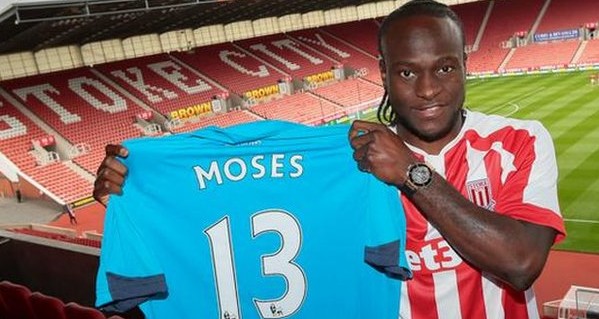 Victor Moses’ five-star performance on his debut at Stoke City earned him the Man of the Match award in their 3-0 bashing of Portsmouth FC at the Britannia Stadium on Wednesday.
The former Wigan winger joined forces with Osaze Odemwingie, Jonathan Walters and former Liverpool goal poacher, Peter Crouch, in the Stoke City’s attack.
Moses impact was felt in the 31st minute as he cut in on his right foot and hit a venomous strike, which was deflected just wide.
The impressive winger went on to burst free down the left, his low ball across the six-yard for an unmarked Walters who slotted home at the far post to grab a brace in the 46th minute.
Looking lively in the game, the Nigerian launched several attacking forays into the vital areas of the Potters but he was replaced with Marko Arnautovic, who came on in the 63rd of the encounter.
Crouch ended the routing with a header in the 89th minute of the game.
This display at the Britannia Stadium has put to an end the player’s horrendous stay at Liverpool last season.