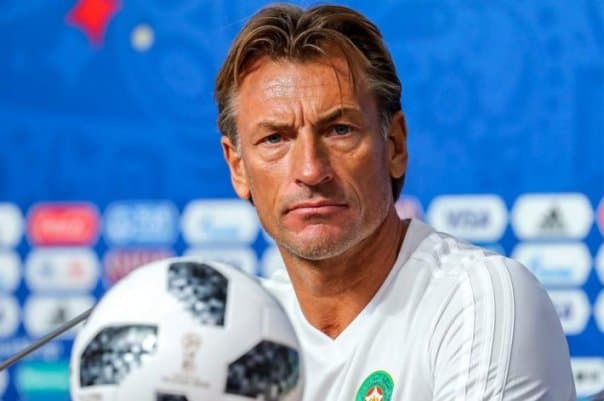 The Royal Moroccan Football Federation has denied reports claiming their head coach Herve Renard has resigned.
Morocco endured a disappointing Africa Cup of Nations campaign, exiting the competition in the Round of 16 with a 1-4 penalty shootout defeat to Benin after the game ended in a 1-1 draw in 120 minutes.
Following the match, reports emerged on Monday suggesting that the former Zambia and Ivory Coast head had stepped down from his coaching role after the underwhelming showing in Egypt.
The FRMF denied speculations by insisting Renard, who took the Atlas Lions job back in 2016, is still in charge.
The FRMF did, though, confirm meetings were held with Renard to review Morocco’s AFCON performance.
“The Royal Moroccoan Football Federation denies the news that is currently being circulated about the resignation of Herve Renard from the training of the national team,” a statement on their official website read.
“It is worth mentioning that the president of the Royal Moroccan Football Federation held two meetings on Sunday and Monday with Mr Renard to evaluate the participation of the national team in the Africa Cup of Nations in Egypt.”
While Renard may not have resigned from his role, the 50-year-old has not exactly committed his future to the Atlas Lions.
Speaking exclusively to Goalhe, he said: “Right now, I haven’t made any official decision about my future.”
Under Renard’s guidance, Morocco qualified for their first World Cup in 20 years when they secured a spot at the 2018 edition in Russia.
While they may have finished bottom of Group B, the African side performed better than many expected in a tough group that included Spain, Portugal and Iran.