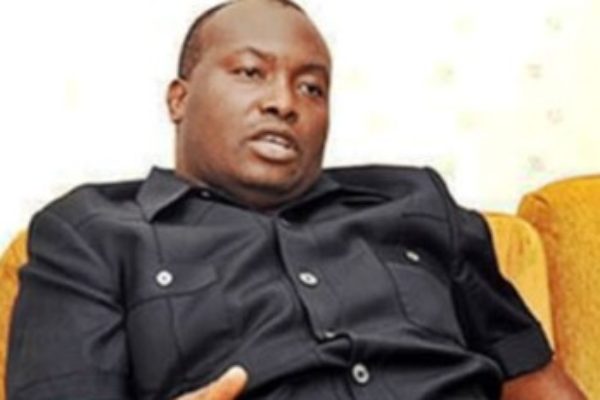 More witnesses on Wednesday testified at the Elections Petition Tribunal sitting in Awka against the victory of Sen. Ifeanyi Ubah of the Young Progressives Party in the Februray 23 election Anambra South Senatorial District election.
Chief Chris Uba of the Peoples Democratic Party is challenging Ubah’s victory in a consolidated petition no. EPT/AN/SEN/11.
Uba had said he had no fewer than 32 witness to give evidences in his petition.
At the resumed hearing, counsel to Ubah, George Igbokwe (SAN), introduced Ama Igwe, an Assistant Director in the ICT Department of Independent National Electoral Commission, Abuja as a witness.
But Obinna Adindu and Chukwuemeka Nwigwe, counsels to INEC and and Ubah respectively, objected that Igwe would not be allowed to testify nor his material evidence be admitted.
They argued that the witness was not originally listed among those that would testify in the petition.
They argued that his introduction into the matter was outside the 21 days stipulated in the Electoral Act for petitioners to plead their evidence.
The defense counsel who told the court that they received Igwe’s statement on oath on July 23, said it would amount to abuse of process if the witness was allowed to testify or his documents admitted.
They prayed the tribunal not to accomodate the witness as it would amount to overreaching amendment of the process and flagrant abuse of the constitution and the Electoral Act.
In his response, Igbokwe told the tribunal that the witness was a product of court subpoena and was invited because of the substantial effect the evidence in his possession had in the matter.
The petitioner’s counsel said that the basis for the objection of the defence was misconceived and totally irrelevant to the case in point.
He said that the petitioner could not have been able to compel INEC to testify on his behalf if not for the order of court.
The senior advocate who cited CPLR 40859(2015) said Appeal Court upheld the admission of Subpoenaed witness to testify as it permited substantial justice to be done to the parties in the matter and the electorate they represented.
He prayed the tribunal to allow the subpoenaed witness to testify and discountenance the objections.
The Chairman of the tribunal, Thelma Okara, directed all parties to forward the authorities they relied on to the tribunal and reserved ruling on the admissibility of the subpoenaed witness for July 27.
In his testimony, Pascal Okpala who said he worked as a PDP collation agent in Nnewi North Local Government Area added that he did not sign the result sheet which the defence showed him.
Okpala who earlier tendered results, voter register and INEC Smart Card Reader results from his party, said he did not know one Arinze Ejimonye whose name appeared on the result sheet.
Tony Ngaji also testified, bringing the number of witnesses that have appeared for the petitioner so far to four.
The tribunal adjourned sitting on the petition until July 27 for further hearing.