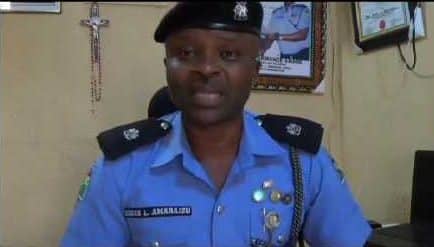 Share
Facebook Twitter LinkedIn Pinterest Email
The Police Command in Enugu State has raised the alarm over increasing cases of passengers and drivers being drugged and disposed of their belongings and vehicles by unscrupulous elements in the state.
The Command’s spokesman, Ebere Amaraizu, said this in a statement on Monday in Enugu.
Amaraizu said that the command was trailing such elements who engaged in the crime.
He said: “The command wishes to inform members of the public, particularly tri-cyclists or taxi drivers as well as other members of the public about the antics of hoodlums.
“The hoodlums at times present themselves as doing good by way of offering of edibles, fruit juice and drinks to their victims.
“Passengers and drivers are advised to be wary of this as it could serve as a ploy to make one eat and drink and thus, lose consciousness, thereby paving way for the victim deprived of his or tricycle, taxi or other valuables.”
Amaraizu called on members of the public to report any suspicious person, movement, object as well as suspicious gathering in their localities.
He said: “Members of the public are further reminded on the need to be security conscious and report any suspicious movement and threat to peace in their environment to the police or sister security agencies.
“The state command distress call numbers are: 08032003702, 08075390883, 08086671202 and 08098880172.
“This can also be through our social media platforms: Twitter handle @policeNg_Enugu and face-book @Nigeriapoliceforceenugustatecommand.”
Ebere Amaraizu Enugu State Police Command
Share. Facebook Twitter Pinterest LinkedIn Tumblr Email