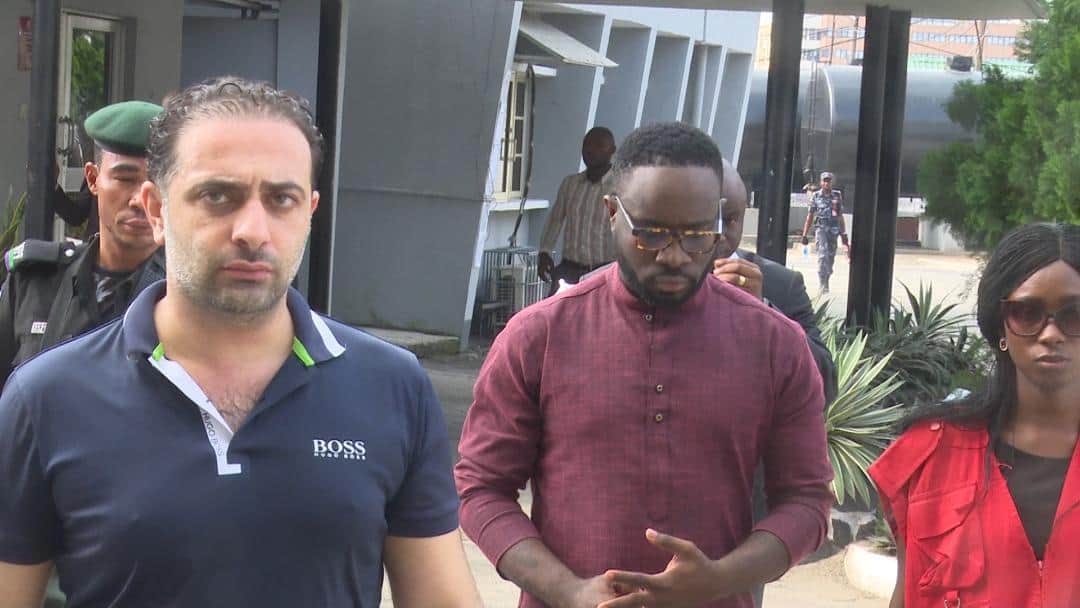 The Economic and Financial Crimes Commission, Lagos Zonal Office on Thursday arraigned the duo of Kayode Phillip and Hamza Koudeih before Justice Muslim S. Hassan of the Federal High Court, sitting in Ikoyi, Lagos on a 25-count charge bordering on conspiracy and money laundering.
The defendants, who are high-valued targets in Organized Cyber Syndicate Network, were arrested for their alleged involvement in various cyber crimes and money laundering in which Ismaila Mustapha, aka Mompha, was allegedly involved.
One of the count reads: “That you, Kayode Phillip (a.k.a Voice of the King) and Hamza Koudeih (a.k.a. HK) sometime in May, 2019 within the jurisdiction of this Honourable Court conspired among yourselves to commit an offence to wit: conversion of the aggregate sum of $7, 069, 000 (Seven Million, Sixty-Nine Thousand United States Dollars), £1, 000, 000 (One Million Pounds) and €80,000 (Eighty Thousand Euro), which sum you reasonably ought to have known form part of the proceeds of fraud and you thereby committed an offence contrary to Sections 18 (a), 15 (2)(d) of the Money Laundering Prohibition Act, 2015 and punishable under Section 15(3) of the same Act.”
The defendants pleaded not guilty to the charge preferred against them by the Commission.
In view of their pleas, the prosecution counsel, Abass Mohammed, prayed the court for a trial date and asked that the defendants be remanded in Correctional Service custody as the detention facilities of the EFCC custody had been over-stretched.
The Counsel to the first defendant, Oladele Falana, however, informed the court that he had filed a bail application on behalf of his client and served same on the prosecution today.
Falana, therefore, craved the indulgence of the court for the earliest date possible to hear the application.
Counsel to the second defendant, Abdullahi Mohammed, told the court that an application for bail had been filed and served on the prosecution.
Mohammed further urged the court to hear the application and grant the prayers therein, adding: “My client has hinted that he prefers to go to the prison custody and that he will not be opposing the applications of the prosecution.”
Though the prosecution counsel told the court that he had yet to receive a copy of the second defendant’s application for bail, he conceded to the defendant being remanded in prison custody.
Consequently, Justice Hassan adjourned the matter to December 5, 2019 for bail hearing and ordered that the defendants be remanded in the Nigerian Correctional Service custody.