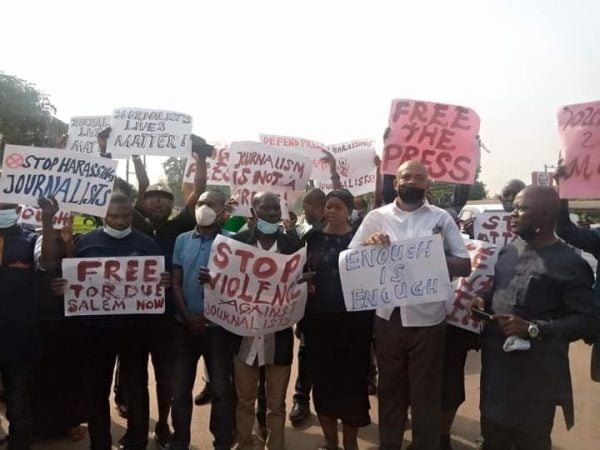 The Inspector-General of Police, Usman Alkali Baba, on Monday assured the Nigeria Union of Journalists of the Force’s readiness to unravel the mystery behind the disappearance of Tordue Henry Salem, a reporter with the Vanguard Newspapers.

The I-G gave the assurance when members of NUJ, FCT Council carried out a peaceful march to his office in Abuja.

The journalists were there to express displeasure with the silence of the police on the matter.

Baba, represented by Frank Mba, the Force Public Relations Officer, disclosed that Salem’s case was with them, explaining that it was officially reported to the National Assembly Police Station on October 15.

He said from their investigation, Salem slept in the house of his sister somewhere around Life Camp on October 12, woke up on October 13, took a Bolt Taxi to the National Assembly, where he worked for Vanguard.

He added: “After close of work, he was last seen at the National Assembly between 4pm and 5pm on October 13 and thereafter his colleagues never saw him again.

“On October 15, the matter was formally reported at the National Assembly’s Police Station.

“The attention of the FCT Commissioner of Police and IG were drawn to the case.

“The IGP gave a firm instruction that all materials and human resources should be deployed at locating and understanding the rationale behind Salem’s disappearance.

“As I speak to you, we have made significant progress in investigation.

“But we were able to trace when he left the National Assembly.

“We were able to interact with a young lady who spent time with him that night.

“We have the recordings of the last call he made.

“Also, we were able to speak with six different persons he spoke to that night.

“So, there are a lot of efforts behind the scene taking place.

“The Police intentionally kept quiet on the case.

“We call it ‘Technical Silence’ because we want to get to a comfortable altitude before we talk to the public.”

Baba said the suspects or whoever had a hand was still out there, adding that the police would not want to provide too much for the suspects to know how much or how far the police had  gone.

He added: “So, I just want to give a strong assurance that everything, humanly and operationally possible, would be done to solve this case.

“We see the media as integral part of what we do.

“We appreciate journalists’ collaboration and support.”

Speaking earlier, the Chairman of NUJ, FCT Council, Emmanuel Ogbeche, submitted a petition to Baba signed by himself and Secretary of the Council, Ochiaka Ugwu.

The petition was titled: “Demand to expedite action for the locating of Mr Tordue Henry Salem, Journalist and Correspondent with the Vanguard Newspaper Who has Been Missing for 12 Days.”

Ogbeche said the FCT Council was optimistic that with adequate funding, up-to-date deployment of technology, a well-motivated personnel and proper synergy, the Nigeria Police Force would be positioned to rise up to the task of securing our country alongside other security agencies.

He said: “The IG Sir, as you are aware, a colleague of ours and a journalist of note, Mr. Tordue Henry Salem of the Vanguard Newspapers, went missing on Wednesday, October 13, 2021, right in front of the Total Filing Station less than a 100 meters from the Force Headquarters.

“Some 48 hours after, fellow colleagues who cover the House of Representatives realised he had disappeared, a report was immediately incidented at the National Assembly Police Division.

“This was followed by a petition to both your office and that of the Director-General of the Department of State Services by his employers, Vanguard Media Limited.

“This was outside calls by the leadership of the NUJ to senior officers of the Police.

“It is regrettable to note that 12 days after Salem disappeared, nothing much has happened to indicate whether he is alive or dead, whether he is captive of the State, a non-state or an alien.

“It is relevant that we remind you that the State owes every Nigerian, particularly a journalist, protection and assurance of safety.”

The FCT NUJ Chairman explained that Nigeria had continued to fare badly on the Press Freedom Index for six successive years and it would be most unfortunate if the disappearance of Salem added to the poor rating.

Ogbeche noted that in 2020, a report of Reporters Without Borders showed that Nigeria went five spots down the Press Freedom Index from 115 to 120 out of 180 countries, with the telling remark that Nigeria remained “one of West Africa’s most dangerous and difficult countries for journalists”.

He further stated that a June 2021 report of the Nigeria Union of Journalists and Media Foundation for West Africa revealed that the media industry recorded seven unresolved killings and 300 violations, affecting about 500 journalists, media workers, and media houses in Nigeria.

He added: “What all these underscore is that the prevailing environment is unsafe, suffocating and dangerous not just for journalists and other media workers but for the sustenance of democracy itself.

“It is in this wise that we are here to demand that Mr. Tordue Henry Salem not only be found, but that adequate protection be offered journalists going forward.

“That the culture of harassment, intimidation, brutalisation and disappearances ends.

“Our demand is reinforced by the fact that as we approach 2023, a General Elections year in Nigeria, the political and economic elites become more desperate to hang on to power and because they will not want to be held accountable to the Nigerian people, the media become their major targets.

“This culture of impunity should and must be arrested by the Nigeria Police as the primary security agency as well as other sister agencies.”

Meanwhile, some journalists who participated in the peaceful March spoke to the News Agency of Nigeria.

Olakunle Awoniyi of WE FM, Abuja said he was happy with what the IG said, adding that he was convinced that the Police would do the needful to find Salem.

Tina Olaitan of the Ministry of Information said the disappearance of Salem was not the first of it kind in the country.

Olaitan said: “But it has to stop.

:It is not a crime to be a journalist.

“Please the Police should look for Salem.

“If he is alive, let is know what he did.