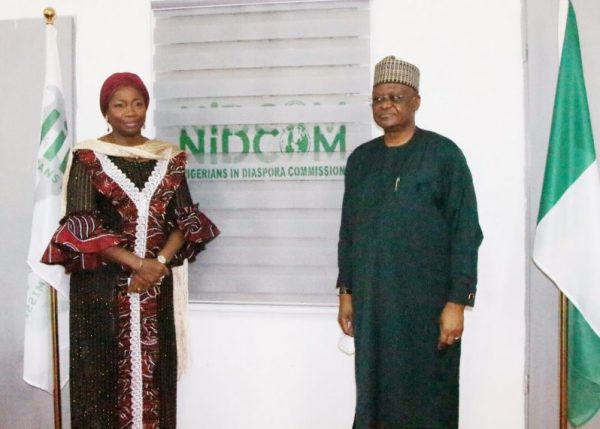 Ambassador Zubair Dada, Minister of State for Foreign Affairs, has assured that Nigerians in the Diaspora would soon be able to vote from their countries of residence.

He gave the assurance at a webinar organised the by Nigerians in Diaspora Commission on Saturday.

The Minister said the Federal Government was working with relevant authorities, including the National Assembly and Independent National Electoral Commission, to achieve this feat.

Dada noted that there were about 17 million Nigerians in the Diaspora making a significant impact on the country’s economy that could not be ignored.

He added that Nigerians in the Diaspora were critical components when considering the country’s development, saying the need to effectively mobilise them could not be over-emphasised.

The webinar, held under the topic: “Mobilising Nigerians in the Diaspora for National Development,” was attended by Nigerians from across the world and was the first in the series.

Dada urged Nigerians in the Diaspora to remain patriotic and committed to the country’s development irrespective of the current security situation which he said was being addressed.

He said: “No matter how long you stay abroad, there is no place like home.

“I urge you to remain patriotic and committed to the development of your fatherland.

“The Federal Government is doing everything humanly possible to address the current issues of insecurity in the country.”

According to him, Nigerians in the Diaspora could also make suggestions and proffer solutions on how the situation could be addressed.

He, however, decried the lack of cordial relationship with the country’s mission abroad and Nigerians in the Diaspora, saying Nigerians should not wait until they had problems before locating the mission.

Dada noted that though there may be some bad eggs in some of the country’s foreign missions, efforts were being made to address the situation.

He said NIDCOM had all the instruments it needed to serve Nigerians in the Diaspora.

“NIDCOM and the Ministry of Foreign Affairs is one and the same, we are out here to serve you,” he said.

He said the Federal Government was doing everything to address the security and infrastructural deficit in the country.

The Minister noted that in spite of the country’s security challenges, foreigners had continued to come in droves to invest because of the benefits they stand to gain.

He said while there were some bad eggs among Nigerians in the Diaspora, the patriotic ones should come to join the government in developing the country.

“In spite of the odds and shortcomings, we have to come home to develop the country, no one can do it better for us,” he said.

In his remarks, the Minister of Interior Affairs, Rauf Aregbeshola, blamed the COVID-19 pandemic for the delay in the issuance of international passports.

Aregbesola assured that everything was being done to resolve the issue.

According to him, the pandemic affected the operations of the Nigerian Immigration Service with regards to issuing international passports.

Abike Dabiri-Erewa, NIDCOM Chief Executive Officer, encouraged Nigerians in the Diaspora to follow up with the commission to be availed of opportunities they could tap into.

Meanwhile, Susan Fajana, a Nigerian from the United Kingdom, charged Nigerians in the Diaspora to be more involved in activities concerning the country rather than being critics always.

On his part, Ade Omole, Chairman of the Nigeria Diaspora Voting Council, noted that countries around the world evolve with time along with the dynamism associated with global trends.

He noted that Nigeria as the most populous black nation in the world could therefore not be an exemption in the issue of Diaspora voting.

Omole, who is also the leader of the United Kingdom chapter of the All Progressives Congress, said Nigeria’s electoral law should be reviewed to guarantee Nigerians in the Diaspora the right to vote.

He said this was especially so in view of the contributions they made to the country’s Gross Domestic Product and her overall development.