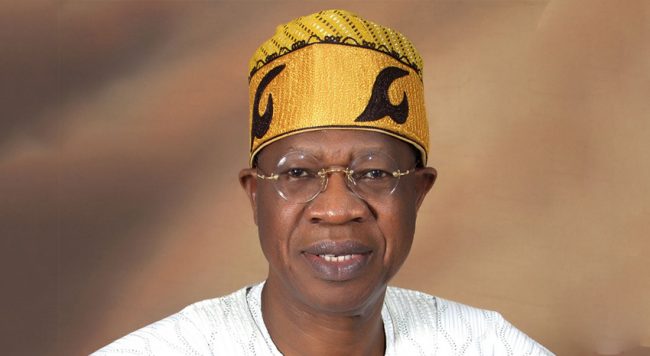 The Minister of Information and Culture, Alhaji Lai Mohammed, has said the growing cases of hate speech, disinformation and fake news in the country are being orchestrated by naysayers and their sponsors to discredit the government, destabilize the polity and make the country ungovernable
The Minister made the statement at the Extraordinary Meeting of the National Council on Information, which has the theme: “Hate Speeches, Disinformation, Fake News and National Unity,”’, in Jos, Plateau State on Thursday.
Mohammed said: “The campaign (to discredit the government) is a multi-million naira project and the people behind this string of hate speech, disinformation and fake news are not about to stop. In fact, they will become more vicious in the days, weeks and months ahead.”
Mohammed blamed the resurgent push for separatism as well as the rising cases of ethnic and religious disharmony on the “growing phenomenon of hate speech, as well as the disinformation and fake news campaign”, and warned that hate speeches and incitement to violence set the stage for the genocide that left at least 800,000 people dead in Rwanda in 1994.
He traced the worsening cases of hate speech in the country to the period leading to the last general elections, when the then presidential candidate of the All Progressives Congress, Muhammadu Buhari, was the target of a vicious campaign.
He said: “Never in the history of electioneering campaign in Nigeria has such a quantum of hate speech been directed at any candidate. This did not stop even when he won the election and became President. For instance, the President had hardly left Nigeria for his vacation in London on 19 January 2017, during which he said he would have routine medical check-up, when these hate and fake news campaigners circulated the news that he has died. Between then and now, they have repeated similar fakes news times without number.”
Mohammed cited three instances of disinformation and fake news targeted at him, including when he was quoted as saying the government does not know who will sign the 2017 budget, when what he said was that when the budget is transmitted to the Presidency, a decision will be taken.
Citing other instances, Alhaji Mohammed said: “On Wednesday, 26 April 2017, after the weekly Federal Executive Council (FEC) meeting, I briefed State House Correspondents on what transpired at the meeting. I said, among others, that President Muhammadu Buhari did not preside over the day’s meeting because he decided to work from home that day. In reporting my briefing, one of the correspondents quoted me as saying the President would work from home henceforth, rather than on that day only.
“Also in May 2017, I travelled to China on official assignment. I had just arrived in that country, after a long flight, when I started receiving calls from Nigeria, seeking my reaction to a story making the rounds in the Social Media, quoting me as saying that though President Muhammadu Buhari is in a London hospital, he is using Made-in-Nigeria drugs. I purportedly made the comment in an interview with Channels Television, after the Federal Government’s launch of the Made-in-Nigeria campaign in Abuja a few days earlier.
“At first, I chose to ignore the story, saying Nigerians would easily see the folly of it. But the phone calls from Nigeria became more frequent and more intense, to such an extent that they could no longer be ignored. I had to put a call through to Mr. John Momoh, and Channels Television promptly issued a rebuttal, saying it neither interviewed me nor carried any such story.”
On the way forward, Mohammed said Nigerians must say no to hate speech and boycott any medium that is used to spew hate or that engages in disinformation and fake news, adding that if left unchecked, the canker-worm of hate speech, disinformation and fake news is capable of undermining national unity and pushing the nation to the precipice.
The Minister also told the delegates to the meeting, which included government information managers from all the states of the federation, that every state must emulate what the Federal Government has done through Acting President Yemi Osinbajo, who held a series of engagements with key stakeholders to calm frayed nerves in the
aftermath of the quit notice recently issued to section of the country by northern youths.
“We must be resolute in tackling the canker-worm of hate speech, disinformation and fake news. We as government information managers must embark on a relentless campaign against these evil tendencies at our various levels, whether federal or state,” he said, adding that the regulators must also be alive to their responsibility by sanctioning erring media outlets
“Yes, our constitution allows freedom of speech and this government believes in it, but freedom of speech must not be allowed to become freedom of irresponsibility,” Alhaji Mohammed.
While appealing to the media, especially the traditional media, to repudiate the purveyors of hate speech, disinformation and fake news, he announced that the Federal Ministry of Information and Culture will soon launch a series of engagements with the media to sensitize them to the dangers posed by the phenomenon.