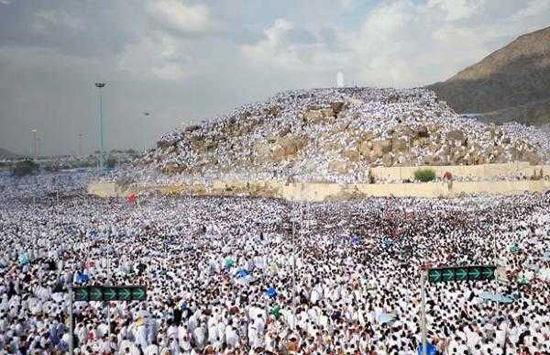 At least three million pilgrims from parts of the world are now at the plains of Arafat, Saudi Arabia to observe the final rites of this year’s pilgrimage.
A News Agency of Nigeria correspondent reports that at least 77,000 Nigerians are taking part in the exercise, which is the peak of the hajj.
The pilgrims are expected to be at Arafat from sunrise until sunset engaging in praises of Allah and seeking for His favours and protection.
The journey to Arafat begun on Saturday with movement to camps in Muna, where the pilgrims spent the night before moving to the plains of Arafat after sunrise.
A NAN correspondent who went round some tents of Nigerian pilgrims reports that most of them had settled and were busy performing their rites.
Although the temperature at Arafat is already at around 40 degrees centigrade, the Saudi Government had provided air conditioners in the tents.
Similarly, water coolers have been placed at the tents to provide cold drinking water to the pilgrims.
NAN.