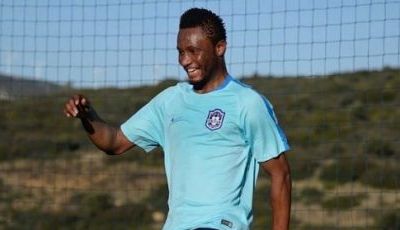 Nigeria captain John Mikel Obi saw enough from England on Saturday to feel he can back Gareth Southgate’s team as potential World Cup winners.
England beat Mikel’s Super Eagles 2-1 at Wembley as goals from Gary Cahill and captain Harry Kane were enough to begin preparations for Russia with a win.
Former Chelsea midfielder Mikel played the whole 90 minutes and was impressed by what he saw from Southgate’s men.
“I think they have a very good chance of going all the way because the youthfulness and energy in this team… you can feel it,” he said.
“I think the pace in the team, you can feel it, and that is why we had some problems in the first half.
“In the second half we corrected some mistakes and played a lot better. I think the England team have a good chance.”
Mikel, 31, is an elder statesman of the squad these days and the Tianjin TEDA man is keen for the squad to develop together as they head to Russia.
“We are a very young team and we have to learn, it is good for this young team to have a taste of what we are going to face in Russia,” he added.
“We have to learn together as a team, we have to improve and that is why we played this game against such a quality side so we can know where we are and now we go back to training and try and improve.”