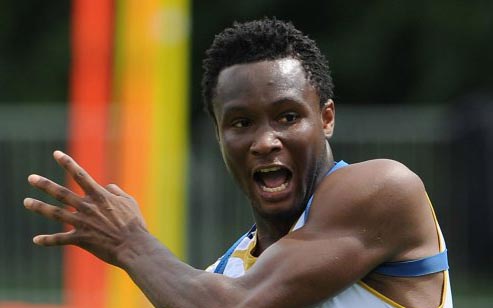 Chelsea midfielder, John Mikel Obi, has agreed a deal in principle to join Valencia, ending a 10-year spell in west London, but his La Liga move hinges on the future of West Ham striker, Simone Zaza.
The Nigerian international, who boasts 78 caps with the Super Eagles, has found himself frozen out by new Blues boss, Antonio Conte, as league-leading Chelsea evolved their style under the Italian coach.
And after failing to make a single Premier League appearance this season, Obi has agreed the outline details of a move to Mestalla after meeting with Valencia’s Sporting Director, Jesus Garcia Pitarch, in London.
However, the crisis-hit Spaniards must now make a big decision as Financial Fair Play restrictions mean that they won’t be able to afford to sign both Obi and top target Zaza this month.
Italian international, Zaza, has been a complete flop with West Ham since arriving on loan from Juventus in the summer, and was all set to move to Valencia this month at the request of head coach Cesare Prandelli.
But after the former Italy boss quit this week after issuing an ultimatum over five new January signings that he coveted, the Zaza deal is now on ice as club owner Peter Lim and sporting director Pitarch decide on where to focus their resources.
Obi, meanwhile, is also being chased by Ligue 1 side Olympique de Marseille and clubs from the Chinese Super League but is understood to prefer a La Liga move.