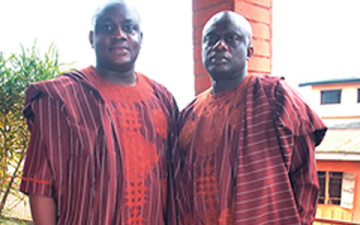 The remains of the M I C boss, Olatunji Okusanya, has been laid to rest.
Okusanya was buried on Wednesday at the Ikoyi Cemetery, Obalende, Lagos State.
The late Ekiti State born popular undertaker, was said to have been buried amid uncontrollable tears as family friends, business associates and sympathisers in their hundreds took a long procession from his Igbosere, Lagos State office to the cemetery to honour him in death.
His contemporaries such as Ebony Casket boss, Dehinde Harrison, and his crew and several other undertakers across the country were not left out at the burial.
Okusanya and his son, Tunji Okusanya Jnr, lost their lives on October 3 in the ill-fated Associated Airline crash, which was carrying the corpse of the late former Ondo State Governor, Dr. Olusegun Agagu, to Akure, the Ondo State capital, for a lying-in-state and burial.
The entire Okusanya family, we were told, are yet to recover from the loss of the bread winner of the family and his first son. MIC Funeral Home is one of the biggest funeral companies in Nigeria.
The company has given befitting burials to eminent Nigerians.
Among his recent jobs were the burial of Chief Oluwole Awolowo, the first son of late Chief Obafemi Awolowo; popular Nigerian female music star, Goldie; and PSquare’s mother